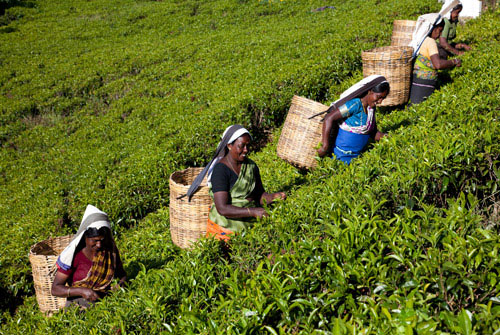 Sri Lanka’s Malaiyaha Tamil workers, whose labour in tea plantations fetches precious foreign exchange to the country, are living in “inhumane and degrading” conditions, a U.N. expert has said.

U.N. bodies have consistently highlighted human rights concerns during Sri Lanka’s civil war period and after, pertaining to the Tamils of the war-affected north and east, and more recently to Sri Lanka’s Muslim community over growing fears of persecution, but the plight of the Malaiyaha Tamil community, historically neglected and marginalised, has received relatively less international attention.

Roughly 1.5 lakh people from the community, with a population over 10 lakh, are engaged in direct labour in the estates, and most of them are women. Their daily wage of LKR 1000 — won after sustained protests in recent years — is tied to an arduous target of 18-22 kgs of plucked tea leaves every day, to be met rain or shine, while braving leeches and wasp attacks. A prominent item in Sri Lanka’s export basket — apart from garments, rubber, and spices — tea brings roughly $1.3 billion a year into the country.

Pointing to the workers’ colonial-era line room accommodation, where up to 10 people live in a 10x12 space, poor sanitation, and the persisting denial of land rights to the community, Mr. Obokata said on Friday: “While I am aware that some alternative houses are built, for instance, in cooperation with the Indian government, I was appalled to see that the inhumane and degrading living conditions in the line houses persist to the present day.”

India has committed to building 14,000 houses in Sri Lanka’s hill country, but the construction is progressing at a slow pace amid private plantation companies’ apparent reluctance to part with land. The visiting U.N. official flagged continuing discrimination of the community based on caste, especially in the Northern Province, where a sizeable hill country Tamil population lives, unable to acquire land.

He drew attention to the exploitative working conditions in Sri Lanka’s garment industry, that employs several thousand women, often enduring unreasonable production targets, inhumane working conditions – some workers “even choose not to go to the bathroom in order to meet the targets”, and poor wages in relation in skyrocketing living costs in the country. Sri Lanka’s garment workers have protested repeatedly during the pandemic, against abrupt sacking of workers and demanding fair wages.

The U.N. expert also spoke of the impact of predatory microfinance debt on Sri Lanka’s rural women, including forcing children into labour to enable families to repay debt accumulated due to high interest rates – from 30 to even 200 % in some cases. “Due to the high interest rates of the loans, many women fall into debt bondage. This has led to suicides of reportedly over 200 women in the past years,” he said.

President Gotabaya Rajapaksa, in his campaign ahead of the November 2019 election, promised to “ensure relief of village women falling victim from unregulated microfinance schemes”. His manifesto has been since adopted as government policy framework. However, affected women are still seeking relief.

“I am deeply concerned by the fact that the government has to date not taken any effective and timely action in regulating and monitoring these exploitative microfinance companies, with the result that they continue to operate unabatedly,” Mr. Obokata said.