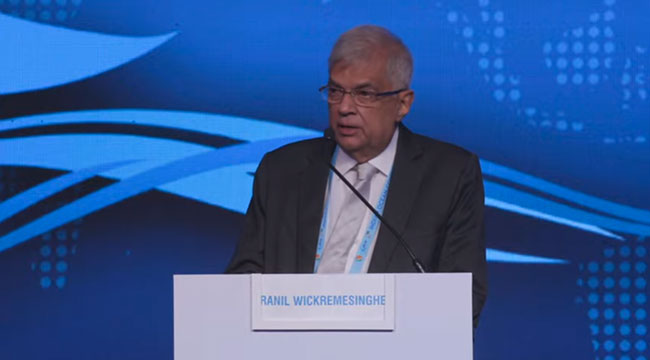 Former Prime Minister Ranil Wickremesinghe says the devastation of Covid-19 on human health and well-being have been compounded by the adverse effects of climate change in the Indian Ocean region.

In fact, the erratic monsoons, increasing droughts, and reduction of fish stocks arising from the changes to ocean water is poised to bring about food scarcity in the coming year, he warned speaking during a special plenary at the 5th Indian Ocean Conference in Abu Dhabi today (05).

“And of course, the strain on Health Systems and Public Finances are and will be endless given the persistent mutation of the virus. The total global economic effects continue to mount,” he said.

“We are all aware of how the recurrent lockdowns have driven large numbers of people into poverty and many others who were on the threshold of middle class to subsistence levels.”

He said the overloaded Health systems are neglecting the treatment of other illnesses and diseases. Therefore, most countries are increasingly vulnerable to other epidemics, that easily become pandemics. The National Education systems are disrupted, he pointed out.

Furthermore, the resources for Education in some countries are being reduced to increase the allocations for health, he said, adding that it is also disrupting the social fabric of all countries including an increase in reports of addiction and domestic violence.

There will be an accrual of these, and further costs, given the culmination of the destructive impact of the pandemic in escalating social and political tension, Wickremesinghe cautioned.

He also said that the loss to Asia from climate change is 5 to 6 times greater than our western counterparts.

The ensuring human displacement, migration and construction of new human habitation caused by the ecological changes will be an intolerable burden on the affected countries in a region given their limited resources to combat climate change, the MP said.

“Depressing as it is, we need to understand that a further downturn of our economies will reduce the resources for development already being eaten up by the increasing ecological and pandemic costs in an intersecting, downward spiral.”

“Yet, we cannot discuss the IOR without accounting for another intersection - that of geopolitics  - the simmering power rivalries between US and China in the IOR,” the former prime minister added.

He said this picture becomes even more complicated by the addition of the AUKUS military alliance which also covers the Indian Ocean. “These developments in an increasingly multipolar world order will bring about regional instability in the Indian Ocean.”

The entanglement of great power rivalry in the Indian Ocean risks removing the focus on the public health shortfalls, digital inequalities, education disparities, unemployment and social fragmentation in some of our countries. The end result will be a further de-stabilisation of the IOR, he warned.

He said the intersecting economic setbacks from Covid-19 and impediments from accelerated climate change as well as the US – China rivalry have a potential to become a critical drag on this region that could prevent its potential to be the next global economic growth pole.

In such a scenario, the growing presence of advanced economies of Europe as outside players in the region could result in a throwback to the 17th and 18th Century Indian Ocean scenario -  with more powerful outside powers dominating the weakened Indian Ocean states, he said.

“This is a wake-up call for our region - for effective regional cooperation,” Wickremesinghe said.