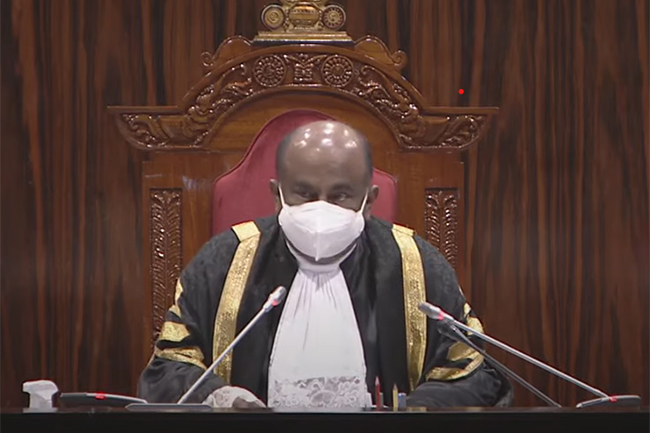 Speaker Mahinda Yapa Abeywardena today (Dec. 06) decided to call for a report on the recent unruly behaviour of several lawmakers in the parliament chambers.

Accordingly, a committee of senior Members of Parliament of the ruling party and the opposition will be appointed within this week to look into the matter.

Speaker Mahinda Yapa Abeywardana announced today (06) that a committee consisting of senior members from the  Government and Opposition will be appointed within this week to look into and submit a report with regard to the incidents that took place in Parliament last Friday and Saturday.

On Saturday (Dec. 04), the members of the main opposition Samagi Jana Balawegaya (SJB) walked out during the parliamentary session, demanding that their security in the House be ensured.

A heated debate also ensued in the House on Dec. 03 and 04, with regard to SJB MP Manusha Nanayakkara not being given additional time to address the parliamentary session.

Chief Opposition Whip, MP Lakshman Kiriella previously alleged a group of nearly 15 - 20 lawmakers of the ruling party of approaching MP Nanayakkara on Friday and attempting to assault him when he requested five extra minutes from the Speaker for his speech.

He also claimed that ruling party MPs again approached MP Nanayakkara on Saturday in the opposition’s lobby following his parliamentary address and tried to assault him.

However, the ruling party parliamentarians, in response, accused MP Nanayakkara of making false allegations in the House and called for an inquiry against him.