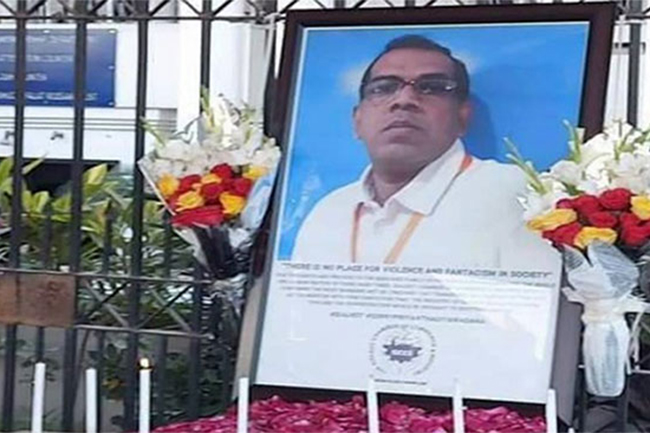 Remains of Priyantha Kumara to be airlifted from Lahore this afternoon

The remains of Priyantha Kumara, who was mercilessly lynched by a mob in Sialkot, Pakistan on Friday (Dec. 03) will be airlifted by SriLankan Airlines flight UL 186 at 12.30 p.m. from Lahore, says the Foreign Affairs Ministry.

The Human Remains of Diyawadanage Don Nandasiri Priyantha Kumara will be arriving in Colombo at 5.00 pm via UL 186 from Lahore (12.30 pm) and will be handed over to his next of kin today (06) at the BIA, the minsitry said.

Accordingly, the remains will be received by the next-of-kin at the Bandaranaike International Airport in Katunayake with the Foreign Ministry coordinating the matter.

The Sri Lanka High Commission in Islamabad has requested an investigation report from Pakistan’s Foreign Affairs Ministry with regard to Priyantha Kumara’s death.

In coordination with the Foreign Ministry, the Sri Lankan High Commission is also in discussions with the Pakistan authorities and the employer of the deceased regarding payment of compensation.