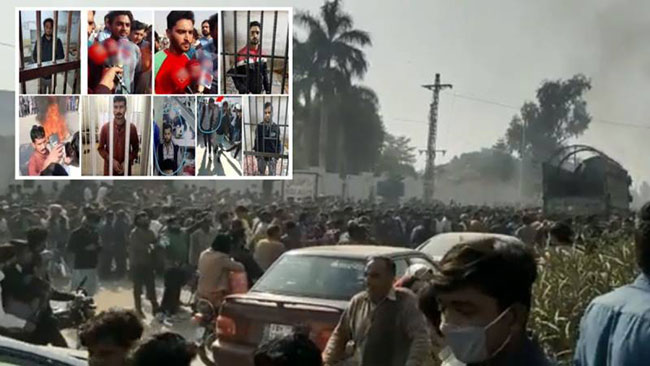 Judge Natasha Naseem heard the case on Monday and talked to the suspects. During the proceedings, it was found that one of the men, identified as Shoaib, was speech-impaired since birth.

It was also observed that the ages of all the suspects were less than 25 years.

At the police’s request, the court granted the authorities 15 days to question and investigate the accused men. They have been summoned again on December 21.

According to the DPO of Sialkot, the total number of arrests in the case has increased to 131 as the Sialkot police tighten the noose around the perpetrators by conducting raids. He said that the main suspects were hiding at the homes of their families and friends. They were identified through CCTV footage.

The DPO added that Punjab Chief Minister Usman Buzdar is overseeing the case and investigations himself.

On Monday, the victim’s body was handed over to the Sri Lankan High Commission in Islamabad by Chairperson Pakistan Ulema Council Maulana Tahir Ashrafi. The commission’s staff accompanied the body to Colombo.

The incident on Friday shocked the nation. Prime Minister Imran Khan condemned the attack on Twitter. He said it was “a day of shame” for the country and everyone involved would be arrested.

Pakistani security personnel have launched a series of raids and so far arrested 131 suspects including 26 prime suspects.

The body of Priyantha Kumara, who was brutally killed by a mob in Sialkot on Friday, will be flown back to Sri Lanka today.

According to details, the body was shifted to the Lahore airport for departure in an ambulance. Higher officials of the Punjab government were also present at the airport.