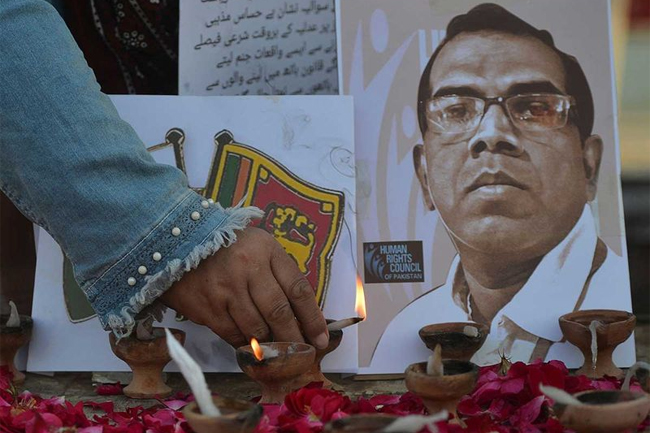 The Sri Lankan government has decided to grant Rs. 2.5 million on a humanitarian basis for the welfare of the wife and children of Priyantha Kumara who was brutally killed in Sialkot of Pakistan.

Accordingly, the Cabinet of Ministers approved the proposal tabled by Minister of Labour Nimal Siripala de Silva at the meeting held on Monday, the Government Information Department said.

The said amount will be paid from the Employees’ Welfare Fund of the Bureau of Foreign Employment.

The decision was reached after taking into consideration the extensive contribution made by Priyantha Kumara to the Sri Lankan economy over a period of eleven years as a migrant worker.

A mob in Sialkot – one of Pakistan’s most industrialized regions – on December 03 tortured a Sri Lankan man, who worked as a factory manager, to death before burning his body.

The victim, later identified as Priyantha Kumara, was lynched for allegedly tearing down a religious poster of the ultra-radical Islamist party Tehreek-e-Labbaik Pakistan (TLP) in which Quranic verses were inscribed.

On Monday (Dec. 06), his remains were brought to Sri Lanka with official honours and were received by his next-of-kin at the Bandaranaike International Airport (BIA). The foreign ministries of both countries coordinated the matter.

Priyantha Kumara’s remains are currently placed at his residence in Ganemulla area. The final rites are scheduled to be performed tomorrow (December 08).

According to Pakistani media, the Punjab Police has now arrested the ‘most-wanted’ suspect named Imtiaz alias Billi involved in the brutal lynching.

The arrest takes the number of apprehended prime suspects in the case to 27, including the one who plotted to assassinate the Sri Lankan manager, increasing the total number of in-custody suspects to 132.