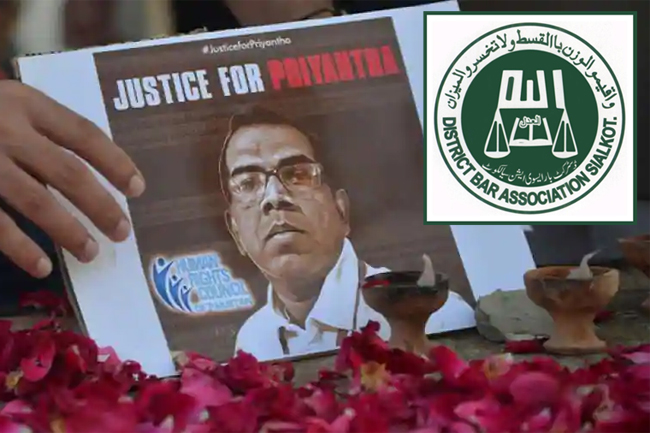 According to Dawn.com, these workers of the factory where the victim served as a senior manager were produced before the Gujranwala anti-terrorism court that remanded them in police custody for 13 days.

The court has ordered police to present the suspects in court again on Dec 21.

The suspects were arrested with the help of CCTV footage. They were suspected of torturing the deceased Sri Lankan national on the roof of the factory, dragging his body on the road and later setting it on fire.

Two days ago, the Pakistani police had obtained a 15-day physical remand of 26 suspects from the anti-terrorism court. They are suspected to have incited factory workers against Kumara.

Sources said the police also arrested suspects belonging to other districts in the country, including Sialkot, Gujrat, Narowal, Lodhran, Rahim Yar Khan and Gujranwala, the Dawn.com reported. The Pakistani law enforcement authorities are identifying suspects through CCTV footage and arresting them using mobile phone data and other technological means.

So far, 345 workers of Rajco Industries have been arrested and shifted to an unidentified location for interrogation. Raids are being conducted in other districts, including Sialkot, to arrest more workers. Pakistani police have presented 34 suspects in the anti-terrorism court after conducting an identity parade.

The Sialkot District Bar Association meanwhile has refused to take up the case of suspects in the case.

Expressing grief over the ghastly incident, the majority in a meeting of the association on Wednesday decided that no lawyer would pursue the case on behalf of the suspects.

Sialkot Chamber of Commerce and Industry expressed sorrow over the killing of Mr Kumara. Qasim Malik, the chamber’s vice president, while talking to the media said the killing had dealt a major blow to the local industry. A meeting of businessmen in Sialkot was held that decided to provide financial assistance of PKR 17.3 million and the monthly salary of the deceased to his family.

Mr Malik said the chamber was also launching a training and counselling campaign for workers, adding that desks would be set up in factories where workers could register their complaints. The respective human resource department would take immediate notice of the complaints so that such incidents could be prevented in the future.

On the other hand, the attendance of workers in Rajco Industries remained low on the second consecutive day.