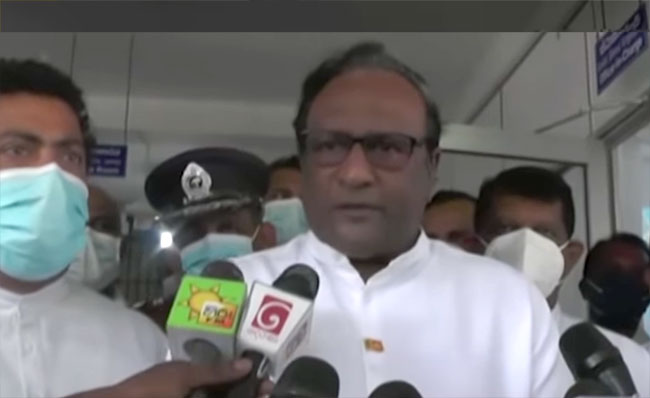 Public Security Minister on the mastermind behind grenade found inside church

Minister of Public Security Sarath Weerasekara says there is a ‘mastermind’ behind the incident in which a hand grenade was placed inside All Saints’ Church in Borella.

The lawmaker also responded to the criticisms made by the Archbishop of Colombo, His Eminence Malcolm Cardinal Ranjith against the police over the handling of investigations into the incident.

Sri Lanka Police today said that statements have been recorded from 14 individuals with regard to the recent recovery of a hand grenade from inside a church in Borella. Reportedly, it had been rigged using sellotape, matchsticks, and incense set to catch fire and explode inside the church.

Inspector General of Police (IGP), C.D. Wickramaratne said that soon after the explosive material was found inside All Saints’ Church in Borella at around 4.40 p.m. on January 11, four individuals including the caretaker of the church were taken into custody.

Cardinal Ranjith, casting doubts over how the probes are being carried out by the police, had stated that the law enforcement officers have failed to properly examine the CCTV footage to apprehend the perpetrator, but arrested the caretaker of the church instead.

However, the public security minister said such statements could break the trust the public has placed on the police.

It was revealed that the caretaker in question who reported the hand grenade to the priest had planted it inside the church, he said further.

Four suspects in total were taken into custody after the hand grenade was discovered, and the caretaker, who had been associated with the church for the past 9 months, was identified as the main suspect of the incident.

The child, used by the suspects to bring the explosive material to the church premises, meanwhile told the magistrate that it was the caretaker who handed it over to him, Minister Weerasekara continued.

The caretaker also admitted to planting the explosive material inside the church, he added, refuting the accusations levelled by the Cardinal that the police arrested and harassed an innocent person.

The police are conducting also investigations into the other individual who was seen in the CCTV footage, the minister assured.

He vowed that this ‘mastermind’ will definitely be arrested in the future.