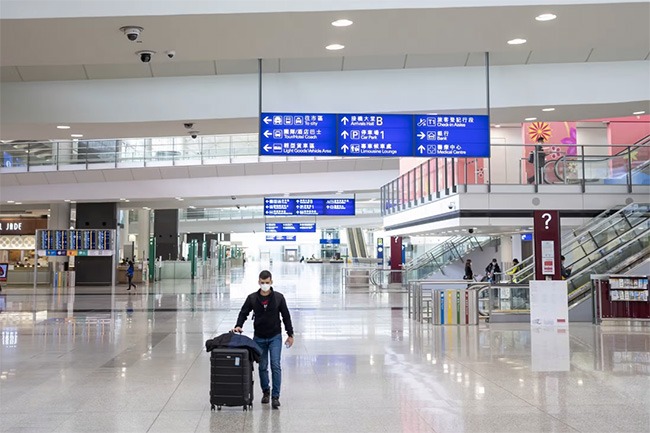 Passengers from more than 150 nations will be banned from transiting through Hong Kong, its airport said Friday, in the latest tightening of the city’s strict anti-virus travel measures.

The move deepens Hong Kong’s global isolation as the city pursues a staunch zero-Covid policy, and creates new headaches for airlines -- some of which have begun avoiding the Chinese territory because of its strict quarantine rules.

Hong Kong ranks territories into categories based on how widespread their Covid-19 infections are, with 153 countries currently classified as Group A -- from which arrivals must spend 21 days in quarantine.

“Passenger transfer/transit services via Hong Kong International Airport for any persons who have stayed in Group A specified place(s) in the past 21 days will be suspended,” the airport said in a statement, adding that the ban was needed to control the Omicron variant’s spread.

The suspension will come into force on Sunday, for a month.

Eight Group A countries -- Australia, Canada, France, India, the Philippines, Pakistan, the UK and the US -- are already banned entirely from arriving in Hong Kong.

The city is battling a small outbreak of the Omicron variant that began with returning Cathay Pacific crew who breached home quarantine rules.

It has reimposed strict social distancing rules, including closing gyms and halting restaurant dining after 6:00 pm.

The government is also investigating Cathay Pacific and said the company might face legal action.

Cathay is flying a fraction of its pre-pandemic routes and many of its long-haul flights transit through its home city.

The transit suspension was first reported by Bloomberg News this week citing sources who said it would not apply to diplomats, officials and athletes heading to next month’s Winter Olympics in Beijing.

The Hong Kong airport statement on Friday listed no exemptions for Olympic delegates.