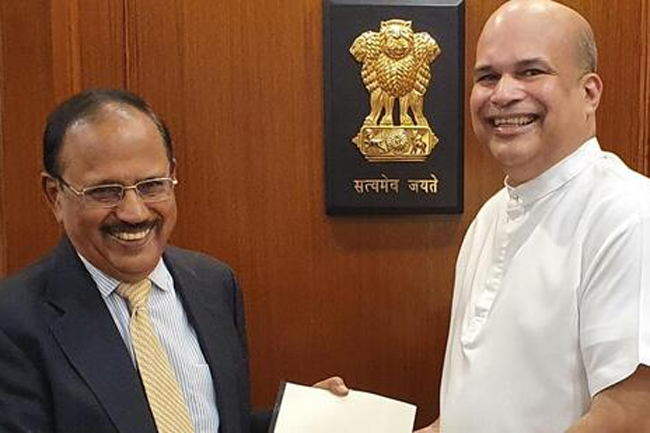 India and Sri Lanka should forge a larger strategic framework that builds on the Indian presence in key projects such as the Trincomalee oil tank farm and Colombo port and benefits both countries, Sri Lankan high commissioner Milinda Moragoda has said.

Moragoda sought to play down Chinese foreign minister Wang Yi’s recent remarks that no “third party” should interfere in China-Sri Lanka ties by citing the comments of Prime Minister Mahinda Rajapaksa, who said that China is a very close friend of Sri Lanka while India “is our brother and sister”.

Sri Lanka inked a deal with a subsidiary of Indian Oil Corporation (IOC) last week for the long-gestating project to refurbish and develop the British-era Trincomalee oil farm, an 850-acre storage facility with a capacity of almost one million tonnes.

In an “integrated country strategy” document that Moragoda prepared before assuming office in India last year, he suggested that the two sides should evolve from a transactional stage to a strategic, and then a special relationship. He said in an interview on Thursday the time has come for both sides to move on from the transactional phase and look at the bigger picture, including integrating Sri Lanka into India’s overall energy security policy.

“The west terminal [at Colombo port] and the tank farm are two very important transactions, As I see it, the two sides should move seamlessly into the strategic area,” he said, adding he perceived the Trincomalee deal as “integrating Sri Lanka with India in the petroleum, oil and gas sector”.

The two sides should jointly develop a business plan for the Trincomalee tank farm that accounts for projections that India’s energy needs will grow by 50% by 2030 and the need for refining capacity will go up 30%. The two sides can look into joint oil and gas exploration in the Cauvery basin and developing a refining facility at Trincomalee, Moragoda said.

“For us, Trincomalee could potentially be a petroleum hub for India, both for storage and refining. Trincomalee can only service India, it is too far away from sea lanes...We need to think strategically and that’s going to be the next step. Looking at this narrowly as a tank farm transaction would be wrong,” he said.

Oil storage and refining facilities at Trincomalee will also boost Sri Lanka’s energy security. “As India is the world’s third-largest energy consumer, it can get much better deals for petroleum than Sri Lanka. We can work with India on our requirements and it will give us energy security,” he said.

Asked about Chinese foreign minister Wang’s remarks, during a recent visit to Colombo, that no “third party” should interfere in China-Sri Lanka relations, Moragoda said: “For us, the relationship with India is the relationship with India. Prime Minister Mahinda Rajapaksa always has a very pithy way of putting things and when he was asked about this, he always said China is a very close friend, but India is our brother and sister.”

He added, “So it’s a different relationship. For us to interpret that comment doesn’t make sense, given the relationship with India.”

Wang’s remarks were widely perceived in New Delhi as a reference to India, especially against the backdrop of India’s opposition to projects under the Belt and Road Initiative in the neighbourhood.

Cooperation on the Trincomalee tank farm, held up since 1987, has been followed by Indian assistance for Sri Lanka to overcome a severe economic crisis, including depleting foreign currency reserves that experts believe can lead to a default on external debt. Following a meeting with Indian envoy Gopal Baglay in Colombo on Thursday, Sri Lanka’s Central Bank governor Ajith Nivard Cabraal tweeted India will provide a Saarc currency swap and other forms of cooperation.

The Saarc currency swap will be for $400 million and India has deferred $500 million due to the Asian Clearing Union for two months. Moragoda said more developments are expected in this regard in the coming weeks.

Sri Lanka expects to get a revolving credit line of $500 million from India’s Exim Bank for buying petrol and diesel and another package for emergency purchases of food and medicines. Steps are being taken to operationalise a line of credit offered by India for counter-terrorism efforts and a grant for a naval floating dock, Moragoda said.

“Sri Lanka is the largest recipient of Indian defence scholarships, and at any time 600 to 700 of our personnel are training in India. We want to increase this and expand it to the police,” he said.

“We’re planning to use the Aadhar card as a template for Sri Lanka’s ID card. Our president is very, very enthusiastic about it. He’s also the minister in-charge of the science and technology sector. Those discussions are ongoing,” he added.