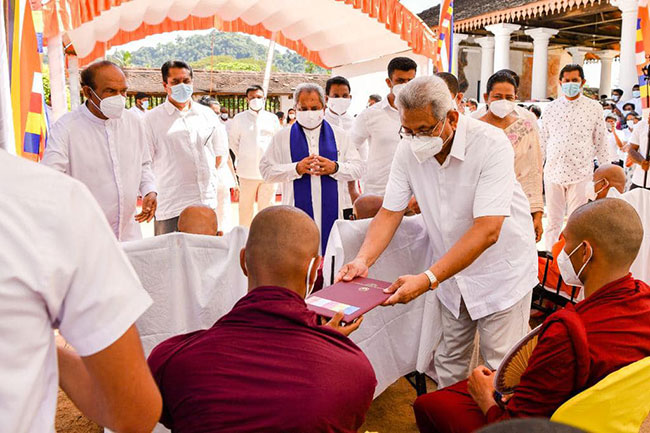 According to the National Policy Framework “Vistas of Prosperity and Splendour”, the Buddhist Affairs Division of the Presidential Secretariat implements the programme with the aim of giving foremost priority to Buddhism while protecting and nurturing it, the PMD said.

Under this programme, priority will be given for the medical insurance policies to monks and Sil Māthās, and assist in the certificate course of Practical Buddhist Studies of Bhikku students, development of attitudes, skill development and international language courses, it said.

The Faculty of Languages of the University of Sabaragamuwa offers English, Tamil, Chinese, Hindu, Japanese and German language courses for monks.

Under the supervision of Vice Chancellor of the Sabaragamuwa University Prof. Udaya Rathnayaka, the programme was initiated to award scholarships to student monks in the Ratnapura District.

Marking this programme, the President presented scholarships to eleven student monks who have qualified for the International Diploma in Languages course.

President Rajapaksa visited the Maha Saman Devala in Ratnapura and received blessings. A large crowd gathered at the temple greeted the President and the President spoke to them and inquired into their well-being.