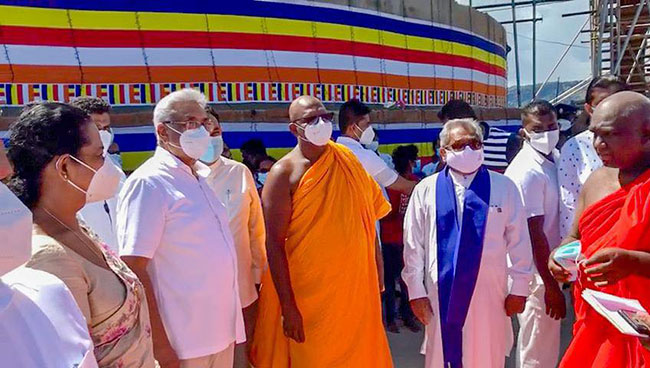 President Gotabaya Rajapaksa, who visited the Kuragala Sacred Site on Sunday, instructed the relevant officials to expedite construction work at the site.

Kuragala Sacred Site is located in the Kaltota Valley, 30 km from Balangoda in the Sabaragamuwa Province. The sacred site with 13 caves where the great Arhats lived has a long history.

President Rajapaksa visited the Sacred Site this afternoon (16) and inspected the restoration work of the Dagaba, Buddha Statue and Dharma Hall.

The development works of the Kuragala temple premises is being carried out under the leadership and guidance of the founder of the Nelligala International Buddhist Center, Venerable Wathurakumbure Dhammaratana Thera.

President Rajapaksa who inspected the construction works instructed the relevant officials to expedite the construction of the road network around the sacred area and the Dharma Hall which is designed to accommodate up to 2,000 people.

President Rajapaksa who engaged in a cordial discussion with the people gathered at the temple premises inspected the adjacent area.