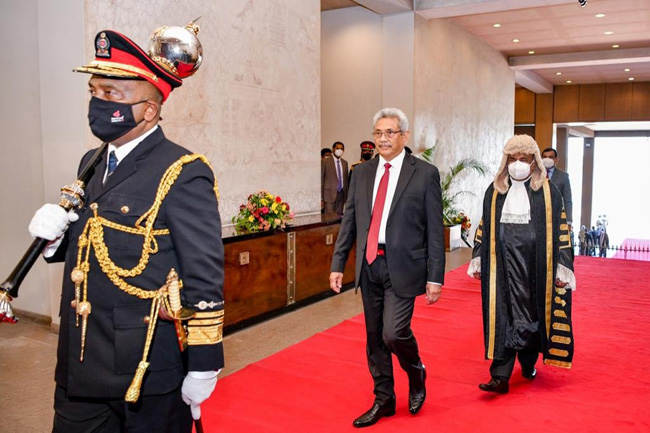 President Gotabaya Rajapaksa arrived in the House for the ceremonial opening of the second session of the 9th Parliament a short while ago.

The Head of State will subsequently present the Government Policy Statement in the House at 10.00 a.m. in accordance with the powers vested in him by Article 33 (2) of the Constitution.

As arrangements were made to hold the ceremony in a very simple manner, on the instructions of the President, there were no gun salutes or car parades to mark his arrival.

Instead, the President and the First Lady were received in front of Parliament with a cultural salute with the participation of the Police Cultural Division.

Speaker Mahinda Yapa Abeywardena and the Secretary-General of Parliament Mr. Dhammika Dasanayaka accorded a warm welcome to the President at the main steps of the Parliament building.

The students of President’s Girls’ College, Sri Jayewardenepura lined up for the recital of Jayamangala Gatha at the main entrance of the Parliament Building in welcoming the President.

Following the presentation of the Government Policy Statement by the President, the House will be adjourned. Afterwards, a tea party has been organized for the Members of Parliament and invited guests.

Foreign diplomats, former Presidents, Prime Ministers, Chief Justice, Supreme Court Justices and the Attorney General have been invited to the ceremonial opening of the second session of the Ninth Parliament. Reportedly, proof of COVID-19 vaccination has been made mandatory for them.

The President had prorogued Parliament from midnight on December 12, 2021, through an Extraordinary Gazette notification, by virtue of the powers vested in him by Article 70 of the Constitution.