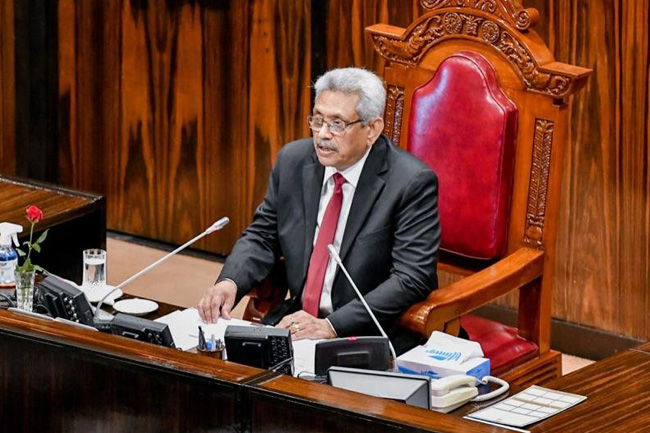 President Gotabaya Rajapaksa, delivering the government’s policy statement in the House today (January 18), insisted that no changes have been made to the green agriculture policy implemented by his administration.

The Head of State arrived at the Parliament this morning for the ceremonial opening of the second session of the 9th Parliament.

“We had to face various challenges when implementing the green agriculture policy.”

The government’s plans and intentions for implementing the green agriculture policy were not communicated properly and several practical issues in introducing it were politicized, the President said adding that this resulted in a misunderstanding about the program.

“Certain changes had to be made to some of the decisions [concerning this policy] as the public was affected, however, there has been no change in the government’s policy in promoting green agriculture.”

Continuing to deliver the statement, the Head of State said the government hopes to rectify the mistakes it had made when implementing the green agriculture policy and to take it forward in a more efficient manner.

“Our final aim is to introduce the latest technology to yield high productivity and to create an international market for local agriculture products by promoting the use of bio-fertilizer,” the President explained.

This can boost the income of those engaged in agriculture and related-service providers, he added.

Speaking on how Sri Lanka’s economy was hit by the ongoing Covid-19 pandemic situation, the President said the government has spent a great of money to protect the lives of the people from the virus infection. The government has also taken measures to provide assistance to daily wage earners who lost their livelihood due to the outbreak of the pandemic, he added.

“We did not increase the taxes that were already reduced, nor did we slash the salaries or allowances of any public sector employees.”

Despite all economic difficulties, the government went on to prioritize the health and well-being of the citizens, he pointed out.

He said the government, at a very early stage, realized that vaccination is the only solution to control the pandemic. “Accordingly, we took necessary steps to import vaccines required to inoculate the country’s population aged above 16 years and we are now successfully rolling out the booster dose as well.”

The President called on the Members of Parliament to work together as public representatives to fulfil their national responsibility to defeat the pandemic and to protect the people by setting aside the differences in their political views.

Speaking further, the Head of State said national security was the main concern when he came to power. He also spoke of the measures taken by his administration to curtail drug networks.

President Rajapaksa insisted that his government would not under any circumstances allow any human rights violations to take place in the country and urged politicians to refrain from provoking people for petty political gains.

He also reiterated that Sri Lanka is ready to respond positively to the observations of the international community.

“We are a free, sovereign nation. We do not want to become embroiled in the power struggles of powerful nations. We respect our neighbourhood countries and we want to maintain a friendly foreign policy with them,” the President stressed.

Further, he urged all lawmakers representing the people of the northern and eastern parts of the island to set aside the differences in their political views and to support the government in its efforts to uplift the livelihoods of the people in these areas.

The President also stated that the rule of law and its transparency is indispensable to strengthen democracy, highlighting the need to bolster the autonomy of the judiciary to ensure the rule of law. He insisted that he has not made any political appointments to the judiciary or the Attorney General’s Department ever since he was elected the Head of State.

Delivering the policy statement, the President also disclosed plans to make Sri Lanka an internationally recognized investment hub within the next three years and to prioritize the importation of electric vehicles in the future.