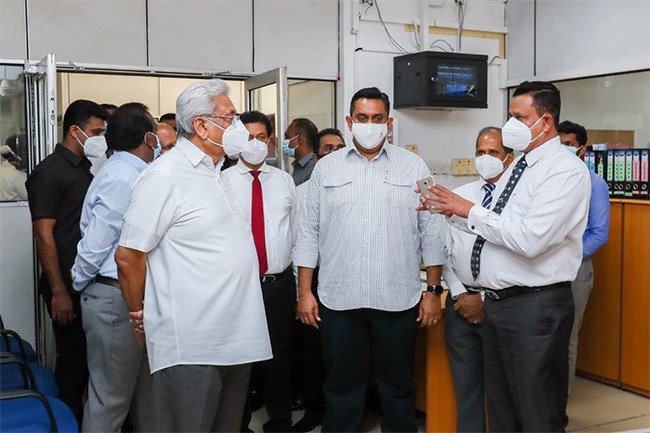 The Agrarian Development Department functions under the purview of the Ministry of Agriculture.

The vision of this public institution is the “Sustainable development of the agrarian society and all agricultural lands in Sri Lanka” and the mission is “Formulation and timely maintenance of institutional, ancillary, legal and management services so as to ensure sustainable development of the agrarian society of Sri Lanka and making optimal productivity from all agricultural lands”.

President Rajapaksa engaged in this observation visit to ascertain whether those objectives were being pursued properly, the President’s Media Division (PMD) said. This is also the first time in the decades-long history of the department that a Head of State has made a visit.

For nearly three hours, the President engaged in a discussion with officials and employees on the steps that should be taken for the promotion of agricultural sector.

Green agriculture and non-toxic food production is the policy of the government. The President pointed out that the distribution, use and yield of organic fertilizer during the Maha Season should be investigated and preparations for the Yala Season should be made on those findings to avoid shortcomings.

Thirty-four public and private companies were given the opportunity to produce organic fertilizer. The authorities need to look into the produce and success achieved by using organic fertilizers in each institution. It was decided to encourage companies that have made high progress and to increase their production. The President also emphasized the need to impart technical knowledge to agricultural research officers to educate farmers in the coming seasons.

The officials pointed out that during the last two years, under the programme to re- cultivate the abandoned paddy fields it has been able to cultivate all the fallow paddy lands in nine districts including Anuradhapura, Hambantota, Trincomalee, Ampara and Batticaloa.

Other barren paddy fields across the island have also been identified and most of them belong to Kalutara, Galle and Matara districts. The President instructed the officials to find the reasons for not cultivating them and to take steps to cultivate the agricultural lands with the intervention of the owners and farmers’ organizations.

The Department of Agrarian Development accepts funds and lends money to farmers through 559 Agrarian Bank branches. Loans ranging from Rs. 200,000 to Rs.1 million will be given to farmers based on Yala or Maha Season and on a yearly system. The officials pointed out that this would alleviate many of the problems faced by the farmers when taking loans at high interest rates from other parties. Considering the importance of this, the President instructed to look into the possibility of strengthening the Agrarian Bank network and intervening to purchase paddy from farmers at higher prices.