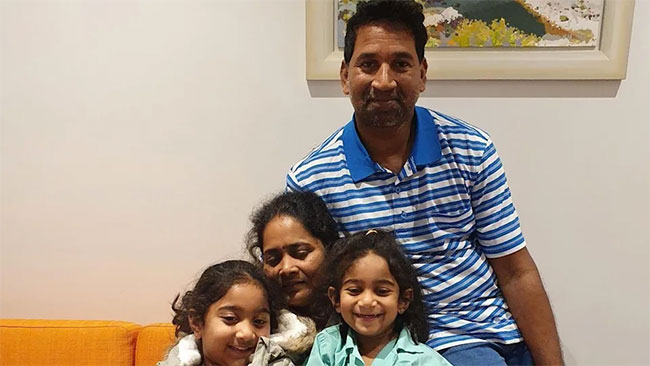 A Sri Lankan family have received a boost in their fight to remain in Australia after a federal court ruled a decision to prevent them from applying for further bridging visas was procedurally unfair.

However, supporters say it is a “hollow victory” and fear the federal government will send the Murugappan family home to be “arrested and possibly tortured” in Sri Lanka later this year.

Three of the four-strong family - parents Priya and Nades along with daughter Kopika - were later granted 12-month bridging visas by Mr Hawke, allowing them to remain in the country.

But a similar visa was not granted to the family’s youngest daughter Tharnicaa.

It ensured the family remained in community detention in Perth and were not able to return to their former home of Biloela, Queensland.

The family have been living in Perth after years of detention, following the medical evacuation of Tharnicca from Christmas Island in June 2021 due to a blood infection.

Supporters say they fear for the family’s future when their 12 month visas expire in September.

Friend Simone Cameron says the Murugappans are “stuck in limbo” despite the court ruling.

“It feels like a hollow victory to be honest,” she told AAP.

“Really the family is still stuck in limbo. This outcome reinforces the fact that no court in Australia can save this family - it is the minister who has all the power.

“Only public pressure will bring about change. We hope he puts a stop to the madness and lets the family get back to Biloela.”

The family’s lawyer Carina Ford told SBS News that the Murugappans now have the option to reapply for a bridging visa and any decision to revoke them will need to be reconsidered.

But Ms Cameron feared after the federal election the Morrison government would again attempt to send the family home to Sri Lanka where she claimed they would be in peril.

An urgent injunction stopped their deportation mid-flight in August 2019.

“It feels like deja vu, just like 2019 when a few short months after the election they tried to remove the family in a terrible way so we still hold fears that might happen again,” Ms Cameron said.

“There is a wealth of evidence out there that suggests Sri Lanka is not a safe place to travel.”

“We have shown for nearly four years that we are not going to stop until the family returns to Biloela,” she said.

“There’s over 600,000 who’ve signed a petition requesting the family to be returned to Biloela.

“He ( Mr Hawke) should be taking that into consideration when he makes these decisions.”