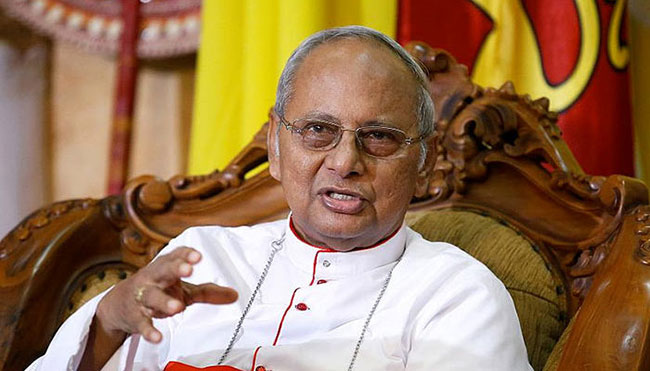 Archbishop of Colombo, Malcolm Cardinal Ranjith has voiced concern over the delay in bringing to justice the individuals named in the report of the Presidential Commission of Inquiry on the Easter Sunday attacks, who are accused of criminal negligence.

“We have been waiting patiently with this government which had promised us that they will do justice to us. But they have not done it,” he said, speaking during a virtual discussion on Sunday (23).

He said the report of the Easter Presidential Commission of Inquiry very clearly has named a series of people as being responsible for inaction and, “allowing this group of gangsters to go ahead with the attack for their own purposes. And these people have not been brought to justice so far.”

“Including the former President who now brags about himself and he says that he will not be brought to justice and all that.”

“All this shows a kind of a deal inside the government to protect all these people,” he charged.

Cardinal Ranjith also said that they would not hesitate to seek the help of the international community and that they are ready to explore that possibility if the need arises.

“We have tried our best all along to try to get justice for our people within our own context, but all these attempts have failed. So therefore, it does not leave us much room but to explore the possibilities of going in international. And that means also going to the UN.”

“We are exploring that possibility and I do not exclude that. Not only the UN but also some of the more pertinent powerful countries that are in relationship with us,” the Archbishop said.

Cardinal Ranjith said they had hoped to somehow find a ‘local solution’ to this, “but it becomes apparent to us that nothing is happening.” “In fact, the legal system operated by the Attorney General does not seem to consider the recommendations of the Easter attack inquiry commission.”