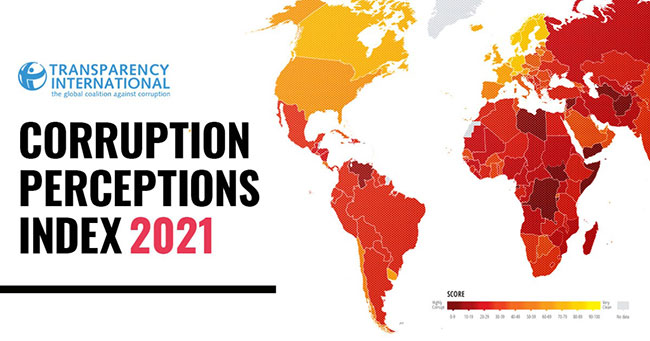 The CPI scores 180 countries and territories around the world based on perceptions of public sector corruption.

The scores reflect the views of experts and surveys from businesspeople. The CPI is calculated using data from 13 external sources, including the World Bank, World Economic Forum, private risk and consulting companies, think tanks and others. The CPI uses a scale from 0 to 100; 100 is very clean and 0 is highly corrupt.

According to Transparency International, Sri Lanka’s overall performance is in line with the observation that corruption levels remain at a standstill worldwide, with 86 per cent of countries making little to no progress in the last 10 years.

Transparency International notes that the global COVID-19 pandemic has been used in many countries as an excuse to curtail basic freedoms and side-step important checks and balances. It adds that despite the increasing international momentum to end the abuse of anonymous shell companies, many high-scoring countries with relatively “clean” public sectors continue to enable transnational corruption.

Transparency International has made the following recommendations to governments to combat the vicious cycle of corruption, human rights violations and democratic decline: