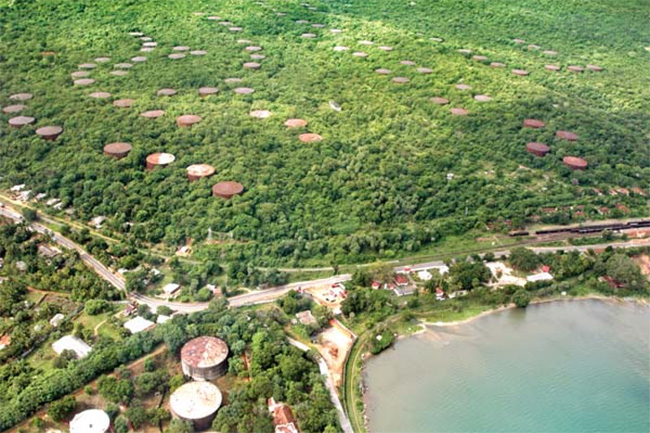 Board of directors of Trinco Petroleum Terminal Ltd. announced

The board of directors of the Trinco Petroleum Terminal Pvt. Ltd., the subsidiary company established for the joint development of 61 oil tanks at the Trincomalee Oil Tank Farm by Sri Lanka and India, has been announced.

A meeting between Energy Minister Udaya Gammanpila and the board of directors of Trinco Petroleum Terminal Ltd. was meanwhile worked off recently to discuss the future plans and tasks of the new company.

On January 03, the Cabinet of Ministers gave the go-ahead to the proposal calling for the implementation of Trincomalee Oil Tank Farm development project with India.

Three days later, the government of Sri Lanka inked a quadripartite agreement on January 06, with India to jointly develop the Trincomalee Oil Tank Farm. It was signed at the Finance Ministry with the Government of Sri Lanka, the Ceylon Petroleum Corporation (CPC), Lanka IOC and the subsidiary company Trinco Petroleum Terminal Pvt. Ltd. as the signatories.

As per the 38-page agreement, 61 tanks at the oil storage complex will be jointly developed by the CPC and Lanka IOC as a joint venture. Lanka IOC is a subsidiary of the Indian Oil Corporation which is under the ownership of India’s Ministry of Petroleum and Natural Gas.

In the subsidiary company named Trinco Petroleum Terminal Pvt. Ltd., established for the joint development of these 61 oil tanks, the CPC retained 51% while Lanka IOC held 49% of the issued shares of the joint venture company.

The two countries agreed to jointly develop and operate the farm, which consists of 99 tanks, over three decades ago but the entire farm was leased to India in 2003 for 35 years and Sri Lanka was unsuccessful in taking part of the farm as a sublease from Indian state-controlled IOC’s subsidiary Lanka IOC in 2017.