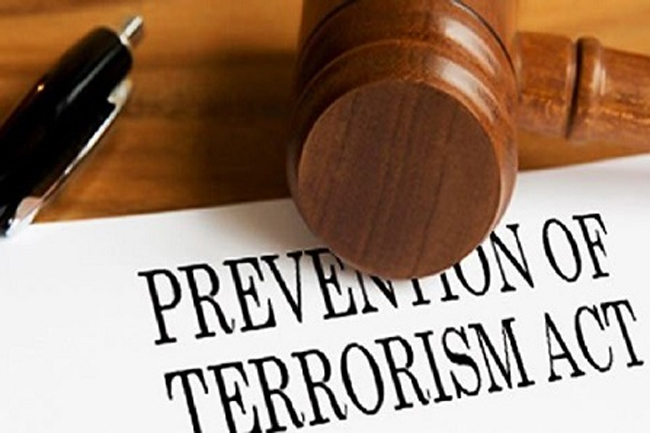 The Sri Lankan government on Thursday (January 27) published the amendments made to the Prevention of Terrorism Act (PTA) No. 48 of 1979.

Thereby, the aggregate period of detention of a person under a detention order will be reduced from 18 months to 12 months.

The amendments will enable magistrates to visit the place of detention to ensure that the suspect is protected to the extent provided for in the Convention against Torture and Other Cruel, Inhuman or Degrading Treatment or Punishment Act, No. 22 of 1994,

Meanwhile, a detainee will be allowed to apply for a remedy guaranteed under Article 126 or 140 of the Constitution.

In addition, the amendments will enable the suspect to be produced before a judicial medical officer to ensure that such person has not been subjected to torture and provide for holding trials on a day-to-day basis to ensure the expeditious disposal of cases.

Further, provisions will be made by the amendments for granting of bail to persons in remand or in detention and to question an Order made or direction given under the principal enactment despite the protection afforded to officers for any act or thing done or purported to be done in good faith.

Foreign Minister Prof. G.L. Peiris meanwhile informed the diplomatic corps that after 43 years, the PTA is being amended with the objective of bringing it in line with the international norms and best practices.

He stated that the approval of the Cabinet of Ministers has been obtained to gazette the Bill containing proposed amendments and thereafter to table it in the Parliament for final approval.

The lawmaker also noted that the PTA is being amended after lengthy deliberations which lasted over several months.

Substantive amendments to the PTA include amendments to the sections on detention orders, restriction orders, expressly recognizing judicial review of orders, expeditious disposal of cases of those charged to avoid long term detention, repealing sections impinging on freedom of expression and introduction of provisions on access by magistrates and judicial medical officers, prevention of maltreatment and torture during the detention period, right to communicate with the family, grant of bail to long term detainees and day to day hearing of cases, the Foreign Minister told the diplomatic corps.