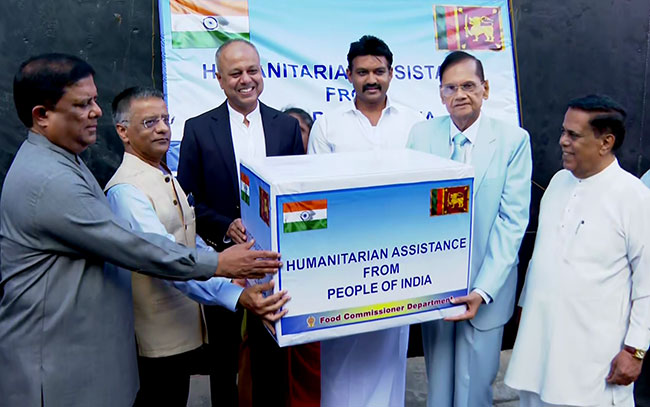 India hands over relief supplies worth over Rs. 2 billion to Sri Lanka

An Indian ship with urgent relief supplies like rice, medicines and milk powder for the people of crisis-hit Sri Lanka, worth more than SLR 2 billion, reached Colombo on Sunday.

The consignment, which consists of 9,000 MT of rice, 50 MT of milk powder and more than 25 MT of drugs and other medical supplies, was officially handed over by Indian High Commissioner Gopal Baglay to Sri Lanka’s foreign minister Prof. G.L. Peiris.

The consignment was flagged off from Chennai port by M.K Stalin, Chief Minister of Tamil Nadu on May 18.

This is the first incoming consignment under a larger commitment of 40,000 MT of rice, 500 MT of milk powder and medicines by Government of Tamil Nadu. This commitment translates to more than SLR 5.5 billion.

The incoming consignment shall be distributed among beneficiaries across the country including Northern, Eastern, Central and Western Provinces by the Government of Sri Lanka. These beneficiaries cover diverse sections of the society.

The assistance from people of India complements multi-pronged efforts undertaken by Government of India by standing with their brethren in Sri Lanka. Several private and social organizations from India have sent assistance to Sri Lanka to meet various urgent requirements.

More humanitarian consignments and other forms of assistance from India shall follow, the Indian High Commission said.