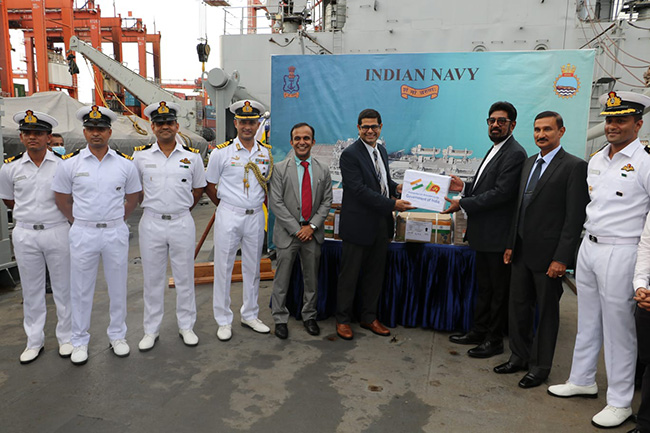 A consignment of drugs and other medical supplies, weighing more than 25 tons and valued to the tune of LKR 260 million, donated by the Indian government reached Sri Lanka today (May 27).

In a statement, the Indian High Commission in Colombo said the Indian Naval Ship (INS) Gharial, a 5,600 tons landing ship was deployed for the delivery of humanitarian assistance materials expeditiously as part of Mission SAGAR IX.

In addition to medical supplies, the ship also carried onboard kerosene for the use of fishermen in Sri Lanka. The consignment of kerosene is slated to be distributed among the beneficiaries by Ceylon Fisheries Harbour Corporation in the coming days, the High Commission said further.

The statement added: “The medical consignment was donated in response to requests by various organizations and hospitals spread across different parts of the country. It bears recall that representatives of Suwaseriya Foundation and Hon’ble Member of Parliament Dr. Harsha De Silva had highlighted their medical requirements to External Affairs Minister Dr S. Jaishankar during his visit to Sri Lanka in March 2022 and these requirements are now being met through the donation. In addition, medical supplies to General Hospital Hambantota, Teaching Hospital, Peradeniya and Teaching Hospital, Jaffna are also being catered to.

“Another large consignment of medical supplies for use by Teaching Hospital in Peradeniya was earlier delivered on board INS Gharial on the 29th of April. These humanitarian supplies are in continuation of Government of India’s ongoing support to the people of Sri Lanka in multiple forms such as financial assistance, forex support, material supply etc. These efforts testify Prime Minister Narendra Modi’s ‘Neighbourhood First’ policy which places people-to-people engagement at its core. These are complemented by the people of India who have also been donating generously to their brothers and sisters in Sri Lanka. Ongoing commitment to the people of Sri Lanka attests to importance attached by the peoples of India and Sri Lanka for the well-being of each other.”