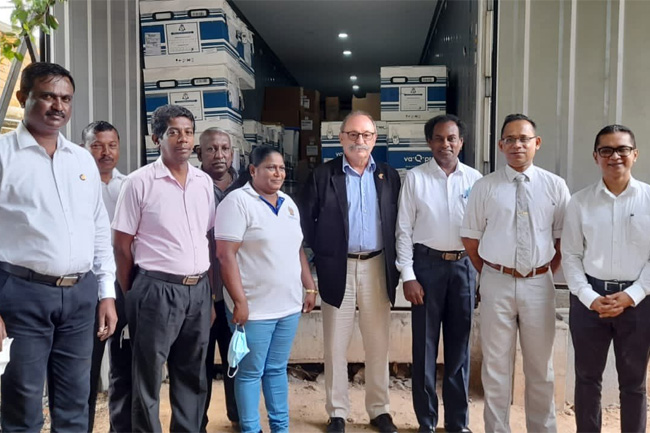 The government of France has donated a consignment of anaesthetic and respiratory medicines worth EUR 300,000 (nearly Rs. 115 million) to Sri Lanka following a request made by the government.

The donation was symbolically handed over to Minister of Health Keheliya Rambukwella by Ambassador of France to Sri Lanka, Eric Lavertu.

The French envoy, stating that the French government is delighted to assist Sri Lanka during this difficult time, expressed his willingness to support the island nation further in any immediate medical needs and shortages of essential medication in the short run.

The health minister, accepting the donation, expressed his gratitude and thanked the ambassador, the French government and the French people for the timely donation.

“This donation will help to maintain a continuous 90day operation in all emergency operating theatres in Sri Lanka,” the lawmaker said.

He also stated that he is not willing to compromise the efficiency of the health sector and is leaving no stone unturned to ensure medicines and services are available as per the norm.

They also discussed pressing issues such as the economic and financial crisis, disruptions to the supply chain, maintaining political stability and unity and food security. The ambassador also expressed his intentions of revisiting discussions on development projects after Sri Lanka navigates itself out of the economic crisis.