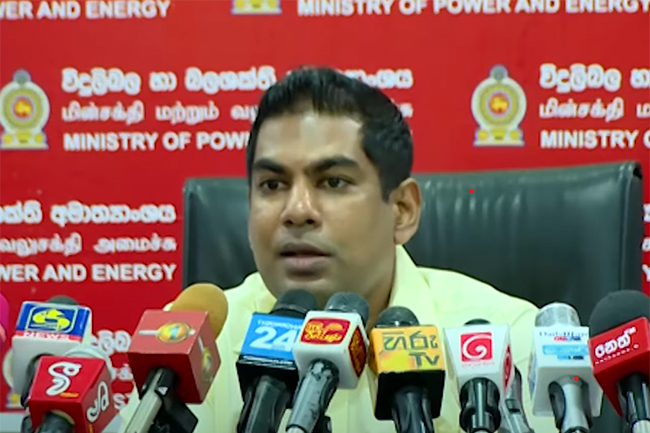 Minister of Power and Energy Kanchana Wijesekara says 1,000 metric tonnes of diesel are expected to be produced daily from the Sapugaskanda Oil Refinery once it recommences operations.

Meanwhile, a Siberian shipment that arrived in Colombo began unloading the product yesterday.

With speculations rife that the shipment was from Russia due to the product being Siberian oil, Power and Energy Minister dismissed the claims stressing that the supplier is a Dubai-based company.

The procurement of the Siberian crude oil shipment was arranged before he took office, the minister added.

The order for this crude oil shipment was placed after opening a non-residential rupee account (NRRA), he explained.

The minister said there is a tri-party agreement between the supplier, the bank and the Ceylon Petroleum Corporation (CPC), according to which the money is deposited in rupee terms. He added tha the Central Bank governor has given undertaking to convert the rupee amount to dollars for the payment after a 30-day period or a 60-day period as agreed with the supplier.

The next shipment of crude oil will also be procured under the same basis “because we need another crude oil consignment in the next couple of weeks to keep the Sapugaskanda oil refinery going,” the minister said further.

However, the government wants to enter into long-term contracts and accordingly a tender procedure has commenced already, the minister said, pointing out that this will be a less burden on the Ceylon Petroleum Corporation and the Treasury if the government can enter into a similar agreement with the companies that are willing to provide crude oil with the financial restrictions that are in place.

Speaking further, he confirmed that Sri Lanka has sought assistance from Russia. The minister has made an official request from the Russian ambassador to Sri Lanka during a recent meeting.

However, he urged the general public not to stockpile fuel as it can lead to the depletion of these reserves before the expected period of time due to the artificial rise in fuel demand.

Meanwhile, the ongoing raids to search hoarded fuel stocks have led to the arrest of a large number of suspects along with more than 50,000 litres of petrol, diesel and kerosene.

According the minister, a total of 1,200 people who were waiting in queues to hoard fuel were intercepted yesterday.

The lawmaker said these fuel hoarders were detected through the mobile application developed by the police.

The IT department of Sri Lanka Police had introduced the app to monitor refuelling history of vehicles and share real-time data with filling stations island-wide.