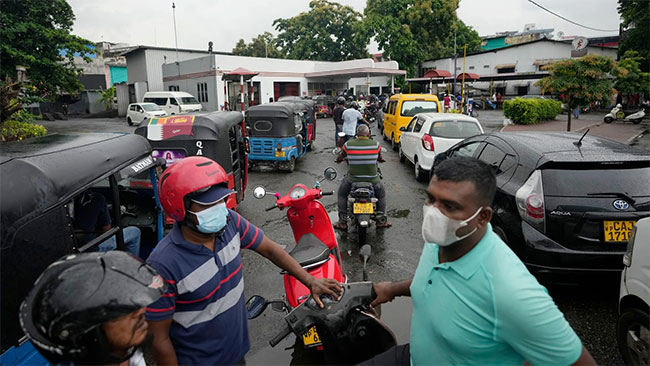 Minister of Power and Energy Kanchana Wijesekera says that a token system to distribute fuel is to be introduced from tomorrow (June 27).

Speaking during a press briefing in Colombo today, he said the decision was taken at a meeting of the Security Council chaired by the President and the Prime Minister yesterday (25).

However, the Minister requested the public not to wait in queues at filling station until the next fuel shipment arrives as the stocks of fuel held by the Ceylon Petroleum Corporation (CPC) are being distributed only for essential purposes.

He further stated that the exact date of arrival for the next fuel shipment cannot be confirmed as the moment.

“The Security Council had met last night, on the instructions of the President and the Prime Minister. Accordingly, they have decided that from tomorrow, if there are people queuing up at filling stations, the security forces including the Army, Air Force, Navy and Police will be deployed at every filling station from tomorrow to give everyone in the queues a token in the order they are queuing up,” he said.

He said that the token will be issued after obtaining their telephone number so that it cannot be changed. The minister said that by the day after tomorrow they will not be able to deliver to every filling station until they receive the next fuel shipment.

Until then, he said they intend to inform the consumers in the order of the tokens when a fuel bowser is delivered.

He therefore requested the public not to queue up for fuel in the next couple of days until the matter is managed in the coming days.

“I know the pain. I know the pressure and the anger. It could be against me or the government or the ministry, the president or the prime minister, but I urge you not to line up at petrol stations in the next few days. You can get the token and go home,” he said.