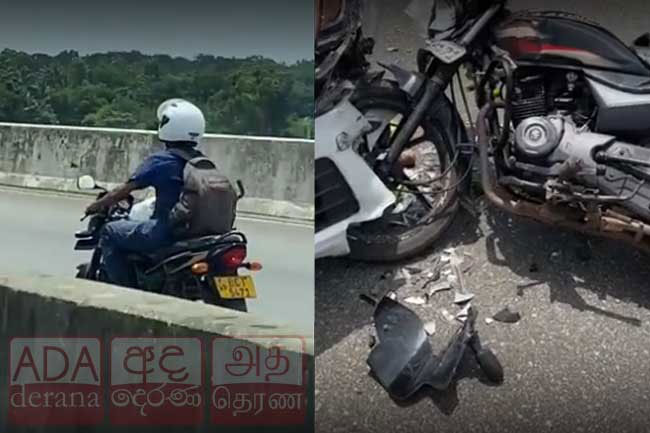 The Southern Expressway Traffic Police have arrested a police constable for driving a motorcycle on the expressway and causing an accident.

The suspect was also found to be under the influence of alcohol at the time of his arrest, police said.

He had reportedly entered the expressway from the Kotelawala interchange and travelled in the direction of Kottawa while ignoring police orders before turning around and once again heading towards Kadawatha on the wrong side of the road.

He had then collided with an oncoming car on the expressway while both the car and the motorcycle were damaged in the accident.

The suspect had been riding his motorcycle for about 2 km on the expressway, police said.

Sapugaskanda Police are conducting further investigations regarding the arrested Police Constable, who is attached to the Bemmulla Police Station.

Footage of the drunken police constable driving a motorbike on the wrong side of the lane on the expressway and the accident had been recorded on a mobile phone.