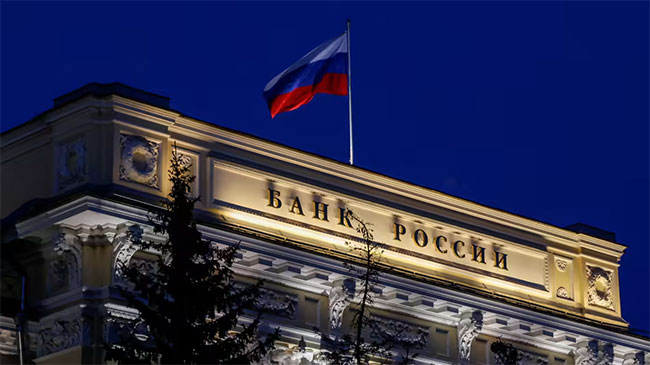 Russia defaults on foreign debt for first time in a century

Russia has defaulted on its overseas debt for the first time in more than a century after missing a Sunday deadline, reports suggest.

Russia has the money to make a $100m payment and is willing to pay, but sanctions made it impossible to get the payments to international creditors.

The Kremlin had been determined to avoid the default, which is a major blow to the nation’s prestige.

The Russian finance minister branded the situation “a farce”.

The $100m interest payment was due on 27 May. Russia says the money was sent to Euroclear, a bank which would then distribute the payment to investors.

But that payment has been stuck there, according to Bloomberg News, and creditors have not received it.

Meanwhile, some Taiwanese holders of Russian bonds denominated in euros have not received interest payments, according to the Reuters news agency, which cited two sources.

The money had not arrived within 30 days of the due date, that is, Sunday evening, and so is considered a default.

Euroclear wouldn’t say if the payment had been blocked, but said it adheres to all sanctions.

The last time Russia defaulted on its foreign debt was in 1918, during the Bolshevik Revolution when the new communist leader Vladimir Lenin refused to pay the debts of the Russian Empire.

Russia’s last debt default of any kind was in the 1998 as the country was rocked by the rouble crisis during the chaotic end of Boris Yeltsin’s regime. At the time Moscow failed to keep up payments on its domestic bonds but managed not to default on its overseas debt.

Russia has seemed on an inevitable path to default since sanctions were first imposed by the US and European Union following the invasion of Ukraine.

These restricted the country’s access to the international banking networks which would process payments from Russia to investors around the world.

The Russian government has said it wants to make all of its payments on time, and up until now it had succeeded.About $40bn of Russia’s debts are denominated in dollars or euros, with around half held outside the country.

Default seemed inevitable when the US Treasury decided not to renew the special exemption in sanctions rules allowing investors to receive interest payments from Russia, which expired on 25 May.

The Kremlin now appears to have accepted this inevitability too, decreeing on 23 June stating that all future debt payments would be made in roubles through a Russian bank, the National Settlements Depository, even when contracts state they should be in dollars or other international currencies.

Finance Minister Anton Siluanov admitted foreign investors would “not be able to receive” the payments, according to the RIA Novosti news agency.

Because Russia wants to pay and has plenty of money to do it, he denied that this amounts to a genuine default, which usually occur when governments refuse to pay, or their economies are so weak that they cannot find the money.

“Everyone in the know understands that this is not a default at all,” RIA Novosti quoted him. “This whole situation looks like a farce.”

Though default is a symbolic blow, it will have few immediate practical consequences for Russia.

Defaulting nations usually find it impossible to borrow any more money, but Russia is already effectively barred from borrowing in Western markets by sanctions.

In any case, it is reportedly earning around a billion dollars a day from fossil fuel exports, and Mr Siluanov said in April the country had no plans to borrow more.