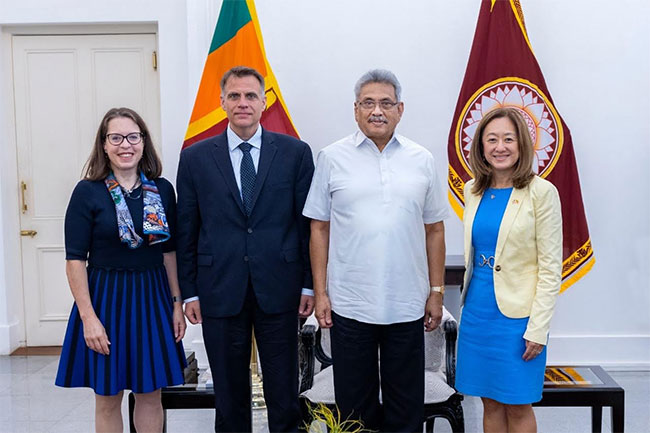 The visiting high-level delegation representing the US State Department and US Treasury Department has met with Sri Lankan President Gotabaya Rajapaksa, a short while ago.

The US Treasury’s Robert Kaproth, US State Department’s Kelly Keiderling and the US Ambassador to Sri Lanka Julie Chung had met with President Rajapaksa to discuss Sri Lanka’s economic crisis.

“It’s a challenging time, but we continue to deliver assistance and long-term partnership to help Sri Lanka achieve a prosperous, secure and democratic future,” Ambassador Chung said in a tweet.

The visiting delegation had also held a meeting with Prime Minister Ranil Wickremesinghe at the PM’s Office this morning (27).

The visitors are expected to meet with a wide range of political representatives, economists, and international organizations in Sri Lanka from June 26 - 29, the U.S. Embassy in Colombo had said.

In all their meetings, they are expected to explore the most effective ways for the U.S. to support Sri Lankans in need, Sri Lankans working to resolve the current economic crisis, and Sri Lankans planning for a sustainable and inclusive economy for the future.

Over the past two weeks, the U.S. has announced $120 million in new financing for Sri Lankan small and medium-sized businesses, a $27 million contribution to Sri Lanka’s dairy industry and $5.75 million in humanitarian assistance to help those hit hardest by the economic crisis.

The United States also committed $6 million in new grants to provide livelihood assistance to vulnerable populations, and technical assistance on financial reform that will help stabilize the economy.

In the coming months, the U.S. will continue to support Sri Lankans as they revive their economy, combat food insecurity, and promote public health and education, the embassy had said.

The United States said it also strongly supports Sri Lanka’s decision to seek assistance from the International Monetary Fund, which can provide the most durable resolution to the present crisis.

1/3
Had the pleasure of hosting a delegation including @KellyKeiderling, Dep Asst Sec of State for Asia, @RKaproth Dep Asst Sec of Treasury. Briefed them on the current crisis including the ongoing IMF discussions & was heartened to hear of President @JoeBiden's concern for #lka. pic.twitter.com/VPGLsenCkR