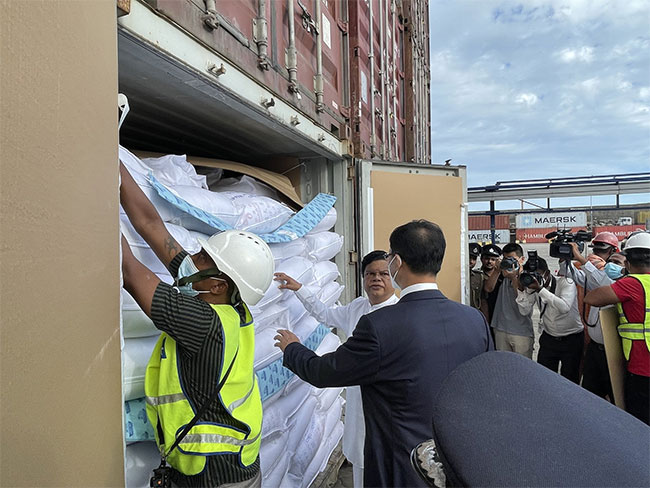 Forty-four containers of 1,000 metric tonnes of rice donated by the Chinese people to Sri Lankan students have arrived and was handed over to Sri Lanka’s Ministry of Education on Tuesday (28).

China is gifting a total of 10,000 MT of rice to 7,900 schools across Sri Lanka and supports its School Meal Program for 6 months, the Chinese Embassy in Colombo said.

Ambassador Qi Zhenhong stated that the vulnerable population, especially children from low-income families suffer the most in the current economic crisis in Sri Lanka.

The Ambassador further stated that another two shipments of rice donations will arrive respectively in the next week and the following week while more are in the pipeline.

He said China will try all-out efforts to sustain the Sri Lanka School Meal Program for at least 6 months.

In addition to this, he said the Chinese Embassy is discussing with Sri Lanka’s Ministry of Education to provide school uniform for Sri Lankan students across the island in the new school year.

Chinese Ambassador Qi Zhenhong announced this at the hand-over ceremony on Tuesday at the CICT, Colombo Port.

44 containers of 1,000 metric tonnes rice donated by #Chinese people to #SriLankan students have arrived and been handed over to 🇱🇰 Ministry of Education today.

🇨🇳 gifts a total of 10,000 MT of rice to 7900 schools across #lka and supports its School Meal Program for 6 months. pic.twitter.com/EGnYHMnpt6