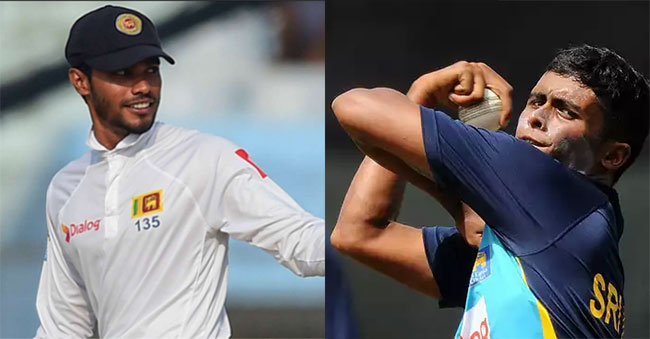 Sri Lankan cricketers Dhananjaya de Silva and Jeffrey Vandersay have been ruled out of 2nd Test against Australia as both players have tested positive for Covid-19, according to Sri Lanka Cricket (SLC).

This brings the total number of Sri Lankan national team players to test positive for the virus to four.

Previously, star all-rounder, Angelo Mathews tested positive late on Day 2 of the first Test, and was subsequently ruled out of the contest; Oshada Fernando was called in as his replacement.

Mathews had returned a positive rapid antigen test after feeling unwell. Sri Lanka Cricket had said he has since been isolated from other team members.

On July 04, Praveen Jayawickrama had also tested positive for Covid-19 and was isolated immediately for five days.

The player was found to be Covid positive when he was tested (Rapid Antigen Test) on the morning of July 04, as he complained of feeling ‘unwell’, the SLC had said.

Jayawickrama was immediately isolated from the rest of the team members and will remain in room isolation for 5 days, it said.

SLC had said that upon identification of Jayawickrama, as Covid Positive, the rest of the team members (players and support staff) were subjected to a Rapid Antigen Test, however all of them had returned negative results then.

Sri Lanka are hoping for Mathews’ return, should he recover in time for the second Test, which starts on Friday, 8 July.

Australia are leading the two-match series 1-0, after sealing a convincing win in the first Test by 10 wickets.