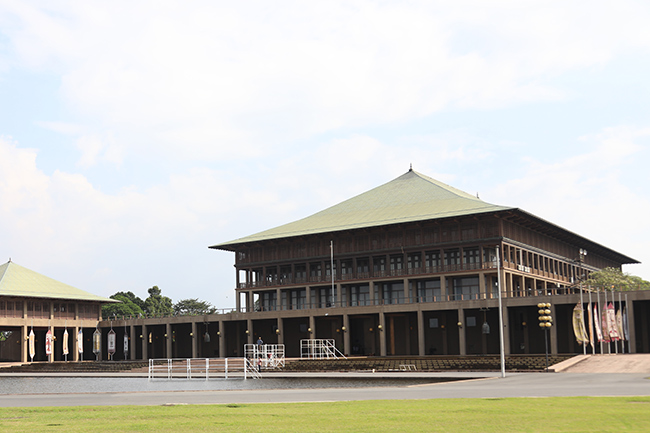 How parliament elects successor when office of President becomes vacant

The procedure for election of the President when the office of President shall become vacant (In terms of Presidential Elections (Special Provisions) Act No. 2 of 1981.)

The parliament media unit has explained the procedure to elect a new President in terms of Presidential Elections (Special Provisions) Act No 02 of 1981, when the office of President becomes vacant.

This election is held in accordance with the provisions of the Presidential Elections (Special Provisions) Act No. 2 of 1981.

In particular, this process is led by the Secretary General of Parliament and the Speaker also has a vote in this election. Also, for this process the Parliament will meet for 3 days.

Accordingly, the following steps will be taken to hold this election under the provisions of the Act.

• In this case, the election shall be held as soon as possible after, and in no case later than one month from, the date of occurrence of the vacancy

• When Parliament meets, the Secretary-General shall inform Parliament that a vacancy in the office of President has occurred. He shall fix a date and time at which nominations shall be received by him being a date not earlier than forty-eight hours and not later than seven days from the date of such meeting.

• On the date fixed for the receipt of nominations Parliament shall meet and the Secretary-General shall act as the returning officer. A member who wishes to propose any other member for election to the office of President shall obtain prior written consent of the member whom he wishes to propose indicating that such member is willing to serve if elected. Also, the MP proposed for candidacy must be present in Parliament that day.

• If only one member be so proposed and seconded the office of President he shall be declared by the Secretary General to have been elected to such office. If more than one member be so proposed and seconded, Parliament shall fix a date and time for the holding of the election. That date should not be later than forty-eight hours from the time of receiving nominations.

• If any candidate desires to be present at the counting of votes he may do so or if he wishes to appoint another member to represent him at the counting.

• Where any candidate has received more than one half of the valid votes cast, the returning officer shall forthwith declare such candidate elected to the office of President.

• Where at the end of the count no candidate has obtained more than one-half of the valid votes, the returning officer shall declare the candidate who has obtained the majority of the votes at that count, elected to the office of President.

• Also, when two or more candidates have the same number of votes, the determination shall be made by lot by the returning officer.