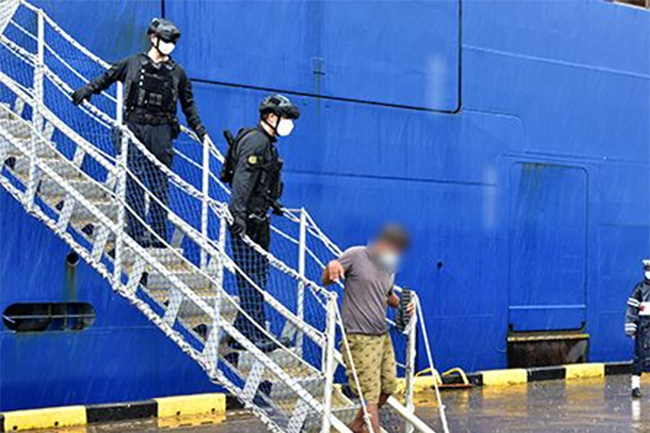 The group of illegal immigrants from Sri Lanka was held by the Australian Border Force on July 21 at Australia’s maritime border, while they were attempting to illegally migrate to Australia via sea.

Sri Lanka Navy, partnering with other stakeholders who use the Indian Ocean Region, conducts regular patrols and operations to prevent human smuggling to foreign countries via sea routes.

As a result of this constant surveillance, the 46 individuals from Sri Lanka were apprehended on July 21 by the Australian Border Force at Australia’s maritime border, when they were attempting to illegally migrate to Australia via sea.

This is also the first instance where a group of illegal immigrants from Sri Lanka was brought to the island onboard an Australian Border Force ship.

Reportedly, the group had set off the sea voyage from Valaichchenai, Batticaloa on July 06 by a multiday fishing trawler. Among the apprehended individuals are residents of Valaichchenai, Batticaloa, Pasikuda, Ampara, Bibile and Mutur, aged between 17 to 49 years. The Australian Border Force handed over the group to the Office of Immigration and Emigration Department at Colombo Port, through Sri Lanka Navy, for onward legal proceedings.

He also went on to mention that Australian authorities have returned 183 Sri Lankan Nationals, including this group of illegal immigrants, attempting to illegally migrate to Australia since the month of May 2022. Speaking further, he said that all maritime people smuggling vessels destined to Australia since October 2013 had been returned to Sri Lanka. With the election of the new Australian government, there was no change in the policy in relation to unauthorized maritime people smuggling arrivals, he further opined.

Speaking at the event, Commander Western Naval Area said that the Sri Lanka Navy and the Sri Lanka Coast Guard made a valiant effort to thwart illegal immigration to Australia by boats, in close coordination with the Australian Border Force. Therefore, he reiterated to the public that there was no room for illegal migration to Australia by sea and urged people not to engage in such sea voyages, getting caught in the tricks of people smugglers. Adding more, he said that the Sri Lanka Navy would take necessary steps to completely curb illegal migration to foreign countries and apprehend those engage in such efforts and ensure their return, for the safety of the precious lives of people.

Dedicated operations mounted by the Sri Lanka Navy until 05th August this year alone have apprehended 1024 individuals attempting to illegally migrate to foreign countries by sea and handed over them for onward legal action. Similarly, the Australian Border Force has nabbed 183 illegal immigrants from Sri Lanka to Australia and deported them back home.

High Commissioner Designate of Australia to Sri Lanka, Paul Stephens, Defence Adviser at the Australian High Commission in Sri Lanka, Captain Ian Cain and a group of senior officers from the Navy Headquarters and Western Naval Command were present at this media briefing.