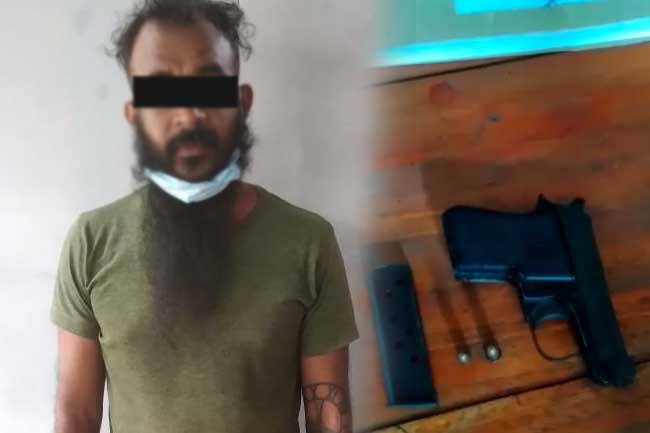 The Police Special Task Force (STF) has arrested a close associate of notorious criminal figures “Samayan” and “Uru Juwa” in the area of Ranala.

The suspect, identified as a 32-year-old named Maduruwala Arachchige Ushan Chathuranga, was taken into custody in raid conducted on Friday (Aug 05), acting on a tip-off received by the STF.

The STF officers also seized a foreign-manufactured pistol, one magazine and two rounds of 6.35mm live ammunition from the possession of the suspect.

Reports revealed that the arrestee was formerly a member of the criminal gang operated by Aruna Udayantha alias Samayan”. Following his assassination in 2017, the suspect had joined the criminal gang run by Dineth Melon Mabula alias “Uru Juwa”.

After “Uru Juwa” was shot dead by the police last year, the suspect had run his drug syndicate using the slain gangster’s money and engaged in other criminal activities.

According to the STF, the suspect had been conspiring to murder an individual identified as Akila, who is believed to be responsible for the death of the suspect’s close friend known as “Bakka”.

The arrestee has been handed over to the Nawagamuwa Police station for further investigations.