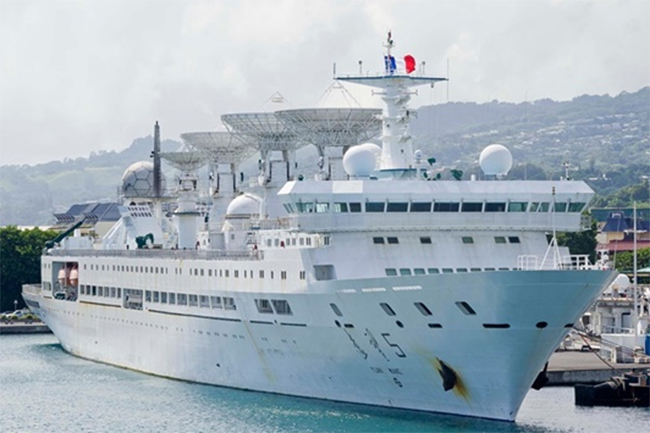 The Sri Lankan government has asked the Chinese government to defer the visit of its space-satellite tracker ship Yuan Wang 5 at Hambantota port “until further consultations” are made between the two governments.

The spy ship was scheduled to dock at Chinese leased Hambantota port on August 11 for refueling and leave on August 17.

Designated as a research stroke survey vessel, Yuan Wang 5 was built in 2007 and has a carrying capacity of 11,000 tonnes. The survey vessel departed from Jiangyin, China on July 13 and is currently sailing close to Taiwan where China is conducting live-fire drills as an aggressive posture against Taipei for allowing US House Speaker Nancy Pelosi to visit the self-ruled island. According to the MarineTraffic website, the ship currently is in the East China Sea between South Japan and northeast of Taiwan.

According to diplomats based in Colombo, the Sri Lankan Foreign Ministry sent a note verbale to Embassy of China referring to a Ministry’s note on July 12, 2022, conveying clearances for vessel Yuan Wang 5 to enter the port of Hambantota for “replenishment purposes.”

India had expressed its security concerns over the docking of the vessel at Hambantota as it was shown as a research vessel while the spy ship can map the ocean bed which is critical to anti-submarine operations of the Chinese Navy. It is understood that the Chinese Ambassador to Sri Lanka muscled his way with the Sri Lankan government and said that denial of permission to the vessel would have an impact on bilateral ties.

While the Cabinet Spokesperson of the Ranil Wickremesinghe government on August 2 announced that the ship was being allowed for refueling, the Indian Navy also conveyed its serious security concerns to Colombo. India has stood shoulder to shoulder with Sri Lanka to tide over the present economic crisis faced by the island nation and has given more than USD 3.5 billion in aid in terms of petrol, diesel, natural gas, foodstuffs, and medicine.

On August 5, the Sri Lankan Foreign Ministry deferred the permission to allow the spy ship to dock at Hambantota port and conveyed it in writing to their Chinese Foreign Ministry counterparts through proper diplomatic channels.

The Sri Lankan decision of deferring the visit of the spy ship shows that it respects the security concern of its neighbor India despite the muscle power of China. Sri Lanka owes more than 10 per cent of its external debt to China with Beijing granted a 99-year lease of Hambantota Port by Colombo in 2017.