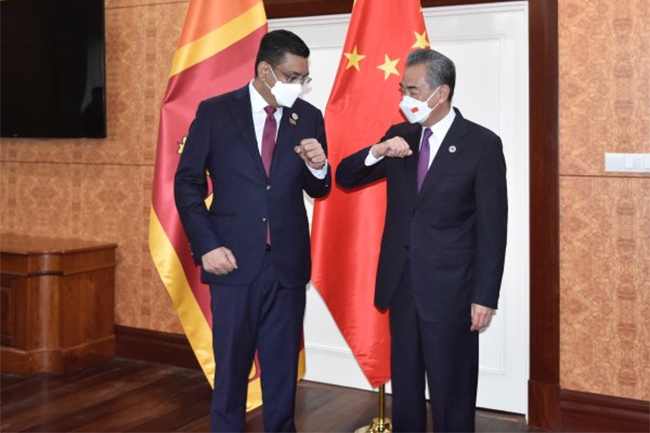 Sri Lanka’s Minister of Foreign Affairs Ali Sabry, PC, has met with his several of his counterparts including Japanese and Chinese foreign ministers on the sidelines of the 29th ASEAN Regional Forum (ARF) Ministerial Meeting in Cathis week.

The ARF took place on August 05 in Phnom Penh, the capital of Cambodia. The forum was hosted by the current chair of ASEAN, Prak Sokhonn, the Deputy Prime Minister & Minister of Foreign Affairs and International Cooperation of Cambodia.

This year’s forum addressed the importance of bilateral relations between the ARF member states with the theme of ‘ARF A.C.T: Addressing Challenges Together’.

Whilst being congratulated by most delegations on his recent appointment, Minister Sabry had fruitful discussions on bilateral relations with some of the key members from the ARF.

The delegations from European Union, China, India, and Japan reiterated their support for Sri Lanka in the path of economic recovery, whilst the delegation from the United States sharing the same sentiments emphasized on the opportunity that awaits Sri Lanka with this crisis to make something very positive out of a very difficult situation.

The Minister in his statement addressed the importance of governments working closely, holistically, and together to curb global crisis, shocks and strains that have a devastating effect across the globe and in this region.

Speaking on the theme for this year’s forum, the importance of achieving sustainable development goals, keeping markets open to rebuilding businesses affected by the pandemic, and the urgency to combat climate change were areas of importance as identified by Minister Sabry.

He concluded his statement assuring that Sri Lanka is determined to work with the fellow member states of ARF to provide greater opportunity for the people of this region.

During the talks, Japanese Foreign Affairs Minister Hayashi Yoshimasa and Minister Ali Sabry vowed to further strengthen the bilateral relations with a view to realizing a “Free and Open Pacific”, on the occasion of the 70th anniversary of the establishment of diplomatic relations between Japan and Sri Lanka this year.

Further, Minister Hayashi noted that Japan would continue to work closely with the international community to implement robust sanctions against Russia and provide support for Ukraine.

In response, Minister Sabry said that it is crucial for the international community to cooperate to deal with the shortages and soaring prices of food and energy at hand.

The two ministers also exchanged their views on the regional affairs, including China and North Korea.

They concurred that it is important for Sri Lanka to overcome the current economic crisis, and bring itself back on track for development at an early date, and discussed measures to this end.

Minister Hayashi referred to the ongoing humanitarian assistance from Japan to Sri Lanka in providing food and medicine. In response, Minister Sabry expressed his gratitude for Japan’s support to date.

During his meeting with Chinese State Councilor and Foreign Minister Wang Yi, Minister Sabry reiterated Sri Lanka’s commitment to the one-China policy. He noted that Sri Lanka opposes any action that interferes in China’s internal affairs and stokes tensions.

Minister Sabry also appreciated the timely assistance provided by the government of China and its people to Sri Lanka in times of difficulty.

Minister Sabry, refuting the claims about Chinese “debt trap”, stressed that China only accounts for 10 percent of Sri Lanka’s external debt, saying Sri Lanka would not have achieved development at all without China’s help.

Sri Lanka will protect the legitimate rights and interests of Chinese investors, he added.

Meanwhile, Minister Wang said China and Sri Lanka have enjoyed long-lasting and traditional friendship. He noted that the Chinese government and people have provided multiple batches of emergency humanitarian assistance to Sri Lanka and will continue to extend assistance through bilateral and multilateral channels.

Minister Wang said he is hopeful that the new government of Sri Lanka will unite and lead its people in getting through the difficulties and push the country back to the right track of development.