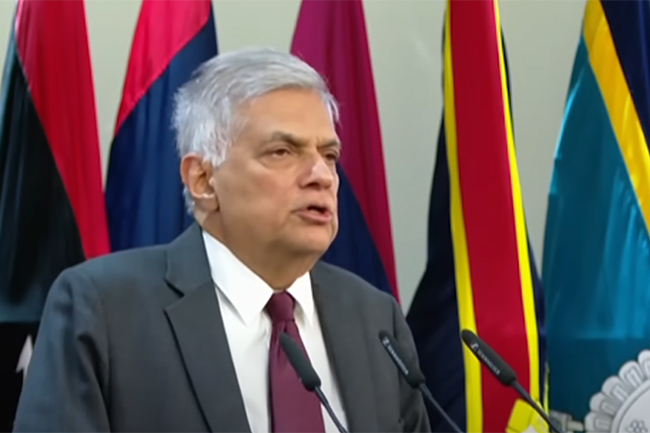 President Ranil Wickremesinghe stated that the nation must pay tribute to the members of the military, who safeguarded democracy by protecting the Legislature from violent protestors who sought to suppress the Executive.

The President made these remarks addressing the military personnel during his first official visit to the Army Headquarters Complex Akuregoda in Pelawatta, Battaramulla, today (09).

The President further said that, if at that time violent groups entered the parliament and disrupted the Legislature, the country would have lost its government, thereby plunging the nation into complete disorder.

President Wickremesinghe also appreciated the members of the security forces having taken measures to carry out the operation through peaceful means, and presented them with certificates of appreciation.

The President was received on arrival by the Army Commander, Lieutenant General Vikum Liyanage, and was accorded a guard of honour.

President Ranil Wickremesinghe further expressing his views stated: “Today we organized this special ceremony to extend our gratitude to all of you for protecting the Parliament. Many people do not know the importance of this. So, I specifically needed to mention a few aspects in this regard. Your principal responsibility is to protect this country as well as its Constitution.

“There are 03 main institutions to effectively implement the people’s sovereignty, namely, the Legislative, Executive, and Judiciary. If these institutions are not properly functioning, in this country, the rule of law will not prevail. A constitutional crisis takes place, there will be no democracy. It was in such a context that you safeguarded the Parliament.

“If we examine the incidents, that took place on July 09, the former President’s official residence was taken over by the violent groups; later, the Office of the President, which embodies the executive power of the President, was taken over. Therefore, the President had no official place to carry out his mandate. Subsequently, the Prime Minister’s official residence, Temple Trees, was also occupied, and thereby disrupting the work of that office. Since the former President was not in Colombo at the time and his whereabouts unknown, the violent demonstrators set fire to my house with the hope that I would resign. Only, the Prime Minister’s Office located on Sir Ernest de Silva Mawatha was not attacked that day.

“They returned on the 13th and also took over the Prime Minister’s Office, disabling the execution of my powers. Later that day, the situation worsened by violent attempts to surround the Parliament. If the Parliament was seized, the legislative processes cannot entirely fulfilled, and therefore the Legislature cannot exercise its powers, resulting in the country having no government.

“Affecting the court process by surrounding the judiciary is not as crucial as the other two institutions. A meeting of the party leaders was held on that day when the Speaker was informed that these groups were approaching, he concluded the meeting. In order to protect the Parliament, the system of governance, at that time, I requested the Heads of the Security Council, specially, General Shavendra Silva, and the Army Commander Lieutenant General Liyanage to safeguard the Parliament.

“If we lost the control of the Parliament, since the system of governance will collapse, the Ministry of Defence cannot function. That is the reason to entrust you to fulfill that responsibility. Accordingly, there was no need to shoot the people who came to take over the Parliament. I thank and praise all of you for such professionalism though; several of your men were injured. The situation in the country changed the next day because there was security.

“This is not like the big battles experienced in the North and East, but a step taken by you to protect the democracy. The constitutional duty of protecting the parliament building and facilitating the convening of its Sessions, has been fulfilled. Your task is now completed. Everyone in the parliament should work together to solve the issues.

“We are trying to implement new constitutional amendments, and are taking steps to bring new parliamentary reform proposals and form an all-party government. It is now being discussed, and all 225 members of the parliament should fulfill their duty. I request the Prime Minister and Speaker to please remind the Parliament about their responsibility. It is imperative for all to work together for the benefit of the country.

“I would like to take this opportunity to thank you all, and extend my gratitude on behalf of the country, the Parliament, and the Government. We have taken steps, and been able to address the country’s economic problems. The cost of living has increased and travel is limited, for which we are seeking solutions. If we want to create stability in the country by next year, it has to be done through the Parliament. You have worked towards protecting the Parliament and allowed its functioning. Particularly, since all of you belong to the Air Mobile Brigade, because it is considered as a main unit in our country, I wish to say a few words in this regard.

“In 1992/93, we discussed that this Brigade should be created. At the same time, I went to London in October, and met General Sir Michael Rose. He was introduced to me by General Denzil Kobbekaduwa and General Ranatunga and General Attygalle were also there. He advised that Sri Lanka establishes such a Brigade. The then Army Commander General Waidyarathne was entrusted with that task and General Jerry Silva started the Brigade and continued this work successfully. We are especially pleased to continue with this initiative.