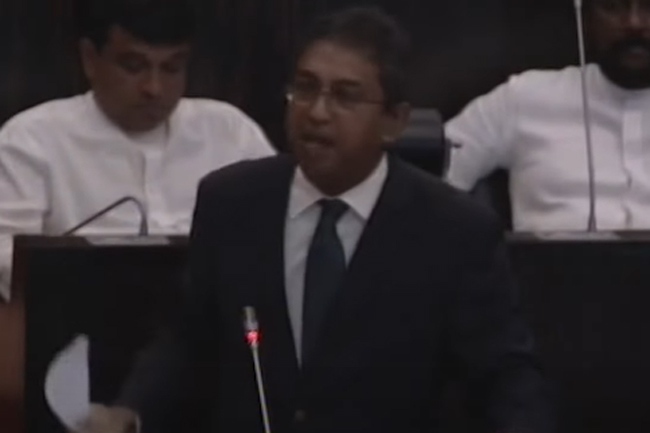 Samagi Jana Balawegaya’s Member of Parliament, Dr. Harsha de Silva says that the opposition is ready to support an all-party government if the incumbent government agrees to proceed with the action plan presented by the opposition.

Making a special statement in the parliament today (Aug 12), the MP further stated that he is not ready to join the government to receive a ministerial post.

The parliament met today for the final day of the adjournment debate on the government’s policy statement presented to the House by President Ranil Wickremesinghe on August 02 following the ceremonial opening of the third session of the 9th Parliament.

He also added that he will submit the short-term program to the parliament to recover the economy, which was made in tandem with experts, professionals, politicians and general public, following multiple rounds of discussions over several months.

MP Harsha De Silva further pointed out that it is essential to secure the trust of the international community to overcome the crisis situation the country is facing, and questioned how a government that cannot be trusted can implement major economical reforms.

Meanwhile, many local newspapers have recently reported on the diplomatic tensions between China, Sri Lanka and India over a Chinese research vessel heading towards the island, he added.

“The [current] government is also fake; it has no mandatory of the people. The President was appointed artificially with 134 votes, according to the constitution, but with no public mandate. It is totally artificial but nothing can be done.”

Dr. Harsha De Silva mentioned that the short-term program to recover the economy which is going to be submitted to the parliament was prepared in the 2010-2014 time period, when the current President was the leader of the opposition. This program was agreed upon by them all back then, he added.

In addition, he also stated that they could not proceed with this program in the 2015-2019 time period, mentioning that widespread economic reforms should be brought forth in face of the current situation.

The MP emphasized that he hopes the people will get what they expected from the ‘Aragalaya’ movement. “If not people will again protest against us, chase us away and the rule of the parliament will be lost completely.”

“We still have an opportunity. It is the obligation, the responsibility of all political leaders to find the way out.  We’re being honest, speaking from our hearts. We want to help, but a platform needs to be provided to do that. Let us together save this country,” he concluded.