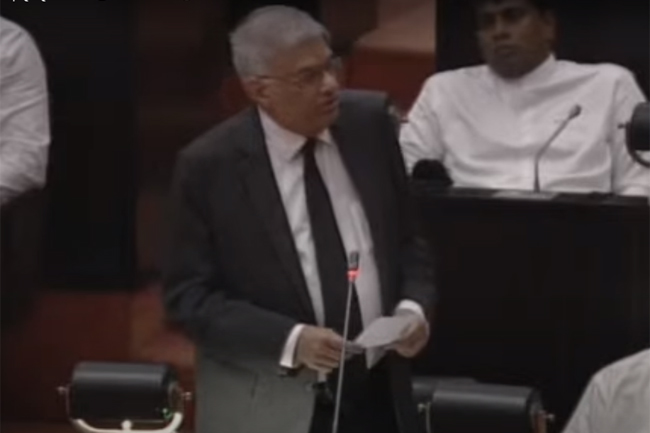 President addresses parliament on vote of condolences on Queens death

President Ranil Wickremesinghe addressed the parliament this morning (Sep. 23) during the vote of condolences on the death of UK’s Queen Elizabeth II.

“Among all letters of congratulations I received on becoming president, the one that was sent by Her Majesty, Queen Elizabeth II was special,” President Wickremesinghe expressed in his vote of condolence.

In his speech, the President also mentioned that Her Majesty has been very frail after the death of her husband, Prince Philip the Duke of Edinburgh, but no one expected a sudden passing away like this. “Two days before her death, we saw her majesty on television with her outgoing Prime Minister and the incoming Prime Minister and she looked a bit exhausted,” he said further, adding that “but, anyway, anyone who spends half a day with outgoing PM Boris Johnson and the incoming PM Liz Truss would have been exhausted.”

He also said that we have to grapple with the issue what Queen Elizabeth II means to us, to Sri Lanka, the United Kingdom, to the Commonwealth and to the world.

Speaking further, the President also stated that as the Queen of Ceylon, her rein signified the transformation of our country from Ceylon to Sri Lanka, adding that a great political change was started under her.

Her Majesty was a staunch Christian and held to her belief as the defender of the Anglican faith, but as the Queen of Ceylon she also upheld the commitment to safeguard Buddhism under the Kandyan Convention of 1815.”

“In fact, a little known item is that Her Majesty presided over the Buddha Jayanthi 2500 celebration as the head of Ceylon together with the Kings of Thailand, Laos, Cambodia and the President of Burma as Myanmar was then known,” the President added.

Speaking on the funeral service at the Westminster Abbey, President Wickremesinghe described it as very moving. The most prominent moment was when all of us in the Abbey, Christian or non-Christian joined tosing her favourite, ‘The Lord is my Shephard’, he added.

“Queen Elizabeth II is no more. Therefore I request and am supporting the motion moved by the Hon. Prime Minister to convey to His Majesty, King Charles III and members of the royal family our condolences.”

“I conclude this tribute to Queen Elizabeth II of Ceylon, the last of our royal line which began with King Vijaya with these words ‘Impermanent affirmations subject to rising and fall. Having arisen, they cease. Their subsiding is bliss’.”