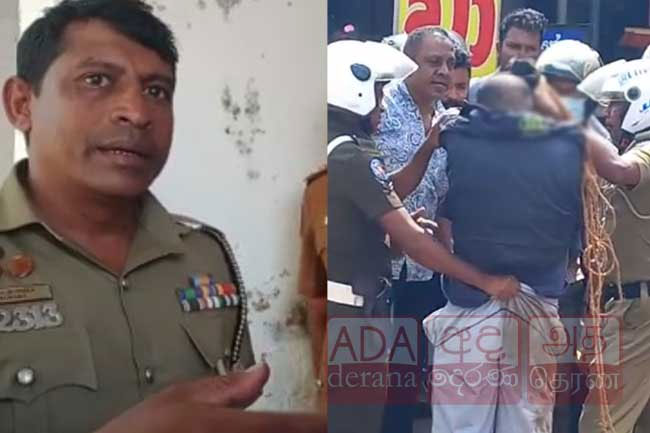 Two suspects have been arrested along with a firearm while attempting to flee after robbing more than Rs. 22 million in cash from a businessman near a private bank in Thambuttegama today (26), following the heroic efforts of a police officer.

The incident had occurred this afternoon while a businessman from the Thambuttegama economic center was bringing a large sum of cash, said to be approximately Rs. 22.3 million, to be deposited at a private bank in the area.

As the businessman had arrived at the bank branch in question in his car, two masked men wearing motorcycle helmets to conceal their identities arrived on a motorcycle and had robbed the two bags containing the cash from the victim after threatening him with a firearm.

The robbers had then reportedly thrown chilli powder at the police officer in order to get away from him and he was wrestling with the robbers. Several people who were in the vicinity had then come to his help and together they had managed to apprehend both suspects.

The police officer involved in the incident, Sergeant D.A.C. Buddhika Kumara attached to Thambuttegama Police, later told reporters that in addition to attacking him with chilli powder, the suspect wielding the firearm had also attempted to shoot him and that despite pulling the trigger the weapon - a 12-bore rifle - had not discharged.

According to reports, preliminary inquiries have uncovered that one of the arrested suspects is a private security guard employed at the bank branch in question.

Thambuttegma Police have launched further investigations into the incident.