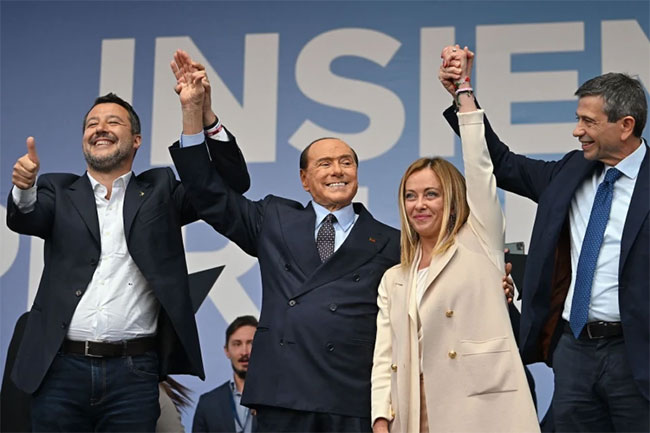 Giorgia Meloni, the leader of the Fratelli d’Italia (Brothers of Italy) party, is set to become Italy’s first female prime minister after leading a right-wing alliance to victory at Sunday’s election.

Meloni’s party, which has fascist origins, is expected to form a coalition with other far-right groups, including League, led by former Interior Minister Matteo Salvini, and Forza Italia, headed by former Prime Minister Silvio Berlusconi.

As Meloni ran on a ticket of putting Italians first and staunch anti-immigration policies during her election campaign, many are worried about what her leadership could mean for Italians and its reverberations worldwide.

The far-right Brothers of Italy, led by Giorgia Meloni, won Monday the Italian elections with 26 percent of the votes, followed by the Democratic Party, which won 19 percent and five star movement with 15.4 percent.

The right-wing coalition, which spearheaded by the Brothers of Italy Party, gained 43.8 percent of the votes, while their left coalition, led by the Democratic Party, only gained 26.2 percent.

The elections, which began yesterday saw 63.9 percent turnout with 50.87 million of eligible voters casting their ballot.

With this win, Meloni would be the first woman Prime Minister in Italian history to form a far-right government.

The Brothers of Italy Party was established in Rome in 1922 during a turbulent period in the country’s history.

Speaking of her win, Meloni indicated that Italians now have a government that represented “their will”, saying that relations between Italy and the European Union required “contributions” from all parties.

The House of Representatives and the Senate are expected to convene in 20 days to kick-start the legislative process and allow President Sergio Mattarella to task Meloni to form the cabinet. — Agencies