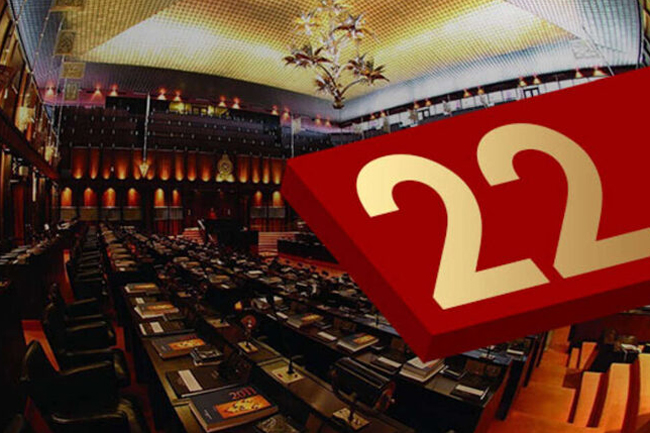 Parliamentary debate on draft of 22A scheduled for October

The Committee on Parliamentary Business has decided to hold the debate on the draft of the 22nd Amendment to the Constitution on October 06 and 07, the Communications Department of Sri Lanka Parliament says.

The meeting was chaired by Speaker of Parliament Mahinda Yapa Abeywardena this morning (Sep. 29).

The committee also decided that the parliament would convene from October 03 (Monday) to October 07 (Friday).

Furthermore, it has been decided to extend the time allotted for the debate pertaining to government business by half an hour from the October 04 (Tuesday) to allocate that time for the independent Members of the Parliament to express their opinions. Accordingly, the time for debating the government business, scheduled to end at 4.30 p.m., will be extended until 5.00 p.m.

Furthermore, Select Committee of Parliament to study the practical problems and difficulties that have arisen in relation to enhancing the rank in the Ease of doing business index in Sri Lanka and make its proposals and recommendations is to be moved.

The Motion at the Adjournment Time brought in by the Government will be held from 5.00 p.m. to 5.30 p.m.

The Secretary General also said that the debate on the 22nd Constitution Amendment Bill is scheduled to be held on October 07 from 9.30 a.m. to 5.00 p.m.

The constitutional amendment, which had been referred to as the 21st Amendment so far, will in fact be the 22nd Amendment, as another draft 21st Amendment has already been gazetted.

The 21st Amendment to the Constitution is the constitutional amendment presented to the parliament by the main opposition Samagi Jana Balawegaya (SJB) in April as a private Bill. It was later published in the government gazette and challenged in the Supreme Court.

Dr. Wijeyadasa Rajapakshe, who was appointed the Minister of Justice, Prison Affairs & Constitutional Reforms, later presented a government Bill to the Cabinet of Ministers in his ministerial capacity, which is referred to as the 22nd amendment.

The Supreme Court, delivering its determination, ruled that the 21st amendment put forward by the SJB cannot proceed further without a public referendum.

In such a backdrop, the Cabinet of Ministers gave the approval to publish the 22nd amendment presented by the Justice Minister in the government gazette.

Policy approval of the Cabinet of Ministers was given on June 20, 2022 for the preliminary draft for the 22nd amendment. The 22nd constitutional amendment bill was prepared by the legal Draftsman accordingly. The Attorney General had later informed that the bill is in accordance with the Constitution.

Consequently, the Cabinet of Ministers approved the proposal presented by the Minister of Justice, Prison Affairs and Constitutional Reforms, to publish the 22nd constitutional amendment Bill in the Government Gazette and thereafter present the same in Parliament for approval.

The constitutional amendment is expected to empower Parliament over the executive president and annul the 20A to the Constitution, which had given unfettered powers to President after abolishing the 19th Amendment.

The 22nd constitutional amendment comprises features of both the 19th amendment introduced by the Yahapalana Government and the 20th amendment brought forth under the presidency of Gotabaya Rajapaksa.

As per the draft Bill, a Constitutional Council will come into effect and it will consist of members including the Prime Minister, the Speaker of Parliament, the Opposition Leader, a Member of Parliament appointed by the President, two members nominated by both the Prime Minister and the Opposition Leader. The council will be chaired by the Speaker.

As per this amendment, no person shall be appointed by the President unless such appointment has been approved by the council upon a recommendation made to the council by the Head of State in instances of appointing the Chief Justice and the judges of the Supreme Court, the president and the judges of the Court of Appeal, the members of the Judicial Service Commission other than its chairman.

The same is applicable when appointing the Attorney General, the Auditor General, the Inspector-General of Police, the Central Bank Governor, the Parliamentary Commissioner for Administration and the Secretary-General of Parliament.

The 22nd constitutional amendment abolishes the ability of a dual citizen to be appointed as a Member of Parliament.

However, if a recognized political party or an independent group which obtains the highest number of seats in parliament forms a national government, the number of ministers in the Cabinet, the ministers who are not in the Cabinet and Deputy Ministers shall be determined by the parliament.