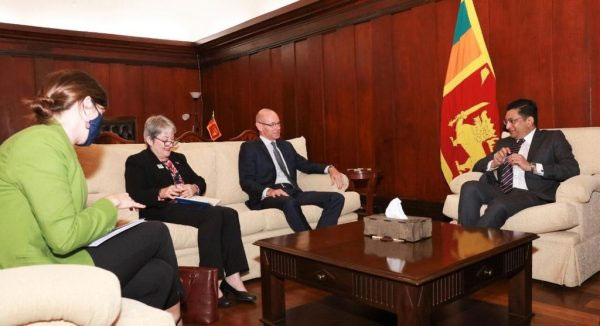 The Minister of Foreign Affairs, Ali Sabry has met with the newly appointed Australian High Commissioner Paul Stephens at the Ministry.

The Foreign Minister congratulated the High Commissioner on his appointment as the Head of the Mission to Sri Lanka.

The Foreign Minister also discussed a range of bilateral issues including matters of mutual interest at the multilateral level.

Senior officials of the Ministry of Foreign Affairs and the Australian High Commission were also present.

The Ambassador extended congratulations to the Minister on his appointment and looked forward to working closely with him during her tenure.

The Ambassador discussed a wide range of issues related to the multi-faceted bilateral cooperation between the two countries. It was noted that Vietnam and Sri Lanka have enjoyed warm and cordial relations for over five decades and there is potential to expand mutual cooperation in a number of areas.

The Minister appreciated that the 4th Round of Bilateral Political Consultations had been held at the Foreign Secretary level in January, 2022.

The strong cooperation between Sri Lanka and Vietnam, in political, social, cultural and educational fields were also discussed during the meeting.