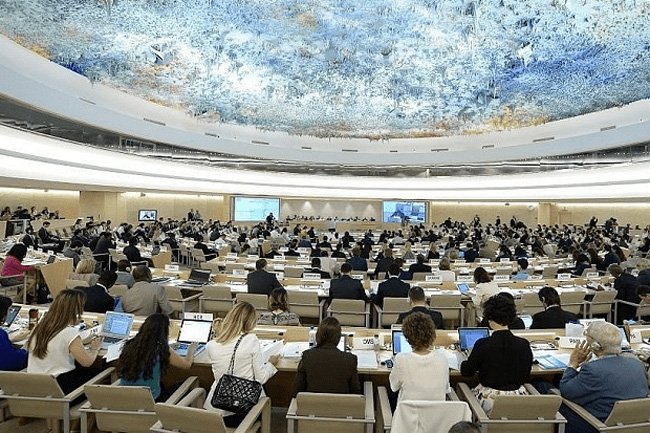 The vote in the UN Human Rights Council (UNHRC) on the new resolution on the human rights situation in Sri Lanka is scheduled to take place today (Oct. 06).

The final draft of the new resolution on Sri Lanka was submitted to the 51st UNHRC session in Geneva yesterday (Oct. 05) along with the UN Human Rights High Commissioner’s report on the human rights situation in Sri Lanka on Wednesday (Oct. 05).

The draft resolution, titled ‘Promoting reconciliation, accountability and human rights in Sri Lanka’ was initially sponsored by the Core Group on Sri Lanka including the UK, US, Germany, Canada, Malawi, Montenegro and North Macedonia.

The draft requests the Office of the High Commissioner for Human Rights (OHCHR) to enhance its monitoring and reporting on the situation of human rights in Sri Lanka, including on progress in reconciliation and accountability and on the human rights impact of the economic crisis and corruption.

The office has also been requested to present oral updates to the Human Rights Council at its 53rd session and 55th sessions and a written update at its 54th session and a comprehensive report that includes further options for advancing accountability at its 57th session in 2024.

The new resolution also expresses concern over the human rights developments since April 2022 including violence against and arrests of peaceful protesters as well as violence against government supporters, resulting in deaths, injuries, destruction and damage to houses of MPs.

The resolution has also sought to extend and reinforce the capacity of the Office of the High Commissioner to collect, consolidate, analyse and preserve information and evidence and to develop possible strategies for future accountability processes for gross violations of human rights or serious violations in Sri Lanka.

Meanwhile, Minister of Foreign Affairs, Ali Sabry has travelled to Geneva for the concluding segment of the 51st Session of the UNHRC.
Ahead of the vote on the new UN resolution on Sri Lanka, Minister Sabry said it is difficult to compete with powerful nations in the UNHRC.

However, whatever the vote result Sri Lanka will stand firm against the new UNHRC resolution, he said speaking to the media from Geneva.

He said Sri Lanka would oppose the proposed UN resolution for accountability that would also include responsibility for economic crimes, emphasising that “external forces” should not guide it on how to manage the country’s economy.

“We will not allow external forces to tell us how to manage our economy, we have taken our own measures for economic recovery,” Sabry told reporters through a video link from Geneva where he is attending the 51st session of the UNHRC.

Asked if Sri Lanka was tolerant of international mediation on resolving the economic crisis while opposing international mechanisms on human rights protection, Sabry said the island was having friendly cooperation on its economic recovery when the countries, mostly the West, tended to interfere in the human rights front.

He said the core group of countries led by the US, UK and others are being heavily lobbied by the Tamil diaspora domiciled there to move against Sri Lanka.

“We have to defend our sovereignty as it is clear that these groups want to perpetuate these accusations to undermine us,” Sabry said.

He reiterated Sri Lanka’s position that international mechanisms to try service personnel were an impingement of the Sri Lankan Constitution.