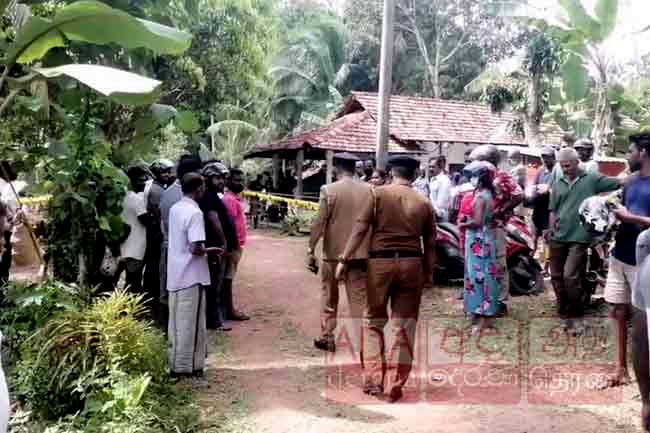 The main suspect in the shooting incident at Minuwangoda in which three members of the same family were killed, has been arrested by the Police Special Task Force (STF) at Rambewa, Anuradhapura.

Three other suspects were arrested in the Galewela area yesterday over the shooting incident in which a father and his two sons were killed.

The victims were shot dead in the area of Gaman Gedara in Minuwangoda at around 7.00 a.m. yesterday (Oct. 06). It is reported that a T-56 assault rifle was used for the murders.

According to the police, a father (51) and his two sons, aged 23 and 24 years, were killed in this shooting.

It has been revealed that the deceased individuals had been released on bail a few months ago, after being imprisoned on murder charges.

The initial investigations have uncovered the motive behind the triple murders to be a dispute that had occurred several years ago in relation to a kite, according to the police.

As per reports, a total of 06 murders have taken place in connection with the relevant incident.

Initially, a father and his son were reported to have been killed over the said kite-related incident back in August 2017.

It is reported that the police had arrested another father-son duo in connection with the aforementioned murder, and one of the two arrestees was later shot dead in August 2018.

Later, a youth, who was the main accused of this murder, was killed in July 2021. The three victims, who were shot dead yesterday, had been reportedly accused of this execution.

Police have uncovered that the suspects involved in the triple homicide reported yesterday had arrived in a motorcycle and a car and used a T-56 firearm.

The dead body of one of the three deceased individuals has been placed at the Minuwangoda Base Hospital, while the other two are under police security at the scene of the murder.

Further investigations of the murder are underway under the inspection of Senior Superintendent of Police (SSP) of Gampaha.