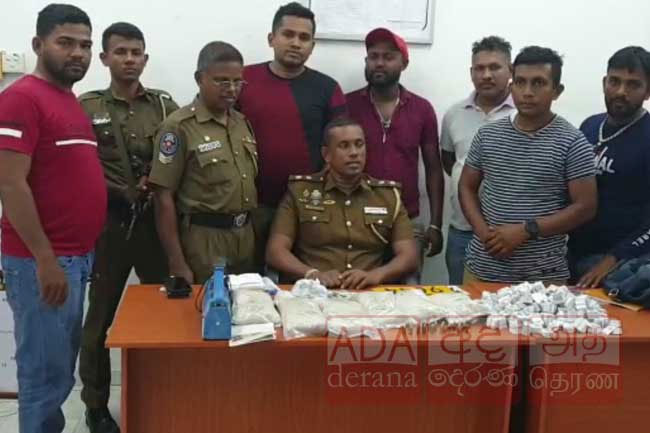 Over 6kg of heroin and ammunition seized in Kesbewa

A person in possession of over 6 kilograms of heroin and 19 rounds of 9mm ammunition has been arrested from a house in Piliyandala-Kesbewa area.

Police had initially arrested a 19-year-old youth near the Ambalanthota Bridge last night (06) along with 40 grams of heroin.

The arrest was made by officers of the Tangalle police division crimes unit, based on information received.

Following the interrogation of the suspect, he had revealed information regarding the house in question located at Siddamulla in Kesbewa.

Acting immediately on this information, police officers had raided the house. However, the suspects who were inside the house had managed escape during the police raid.

Police officers had managed to recover 06 kilograms and 176 grams of heroin as well as 19 rounds of 9mm ammunition from inside the house.

Equipment used to seal plastics and packet the heroin, two fake vehicle number plates, various documents and the keys toa vehicle have also been taken into custody by the police.

Preliminary inquiries have revealed that the suspects had rented out this house in order to operate the drug racket.

Kesbewa Police are conducting further investigations to arrest the suspects who had fled while the arrested youth is to be produced at the Ambalanthota Magistrate’s Court today.