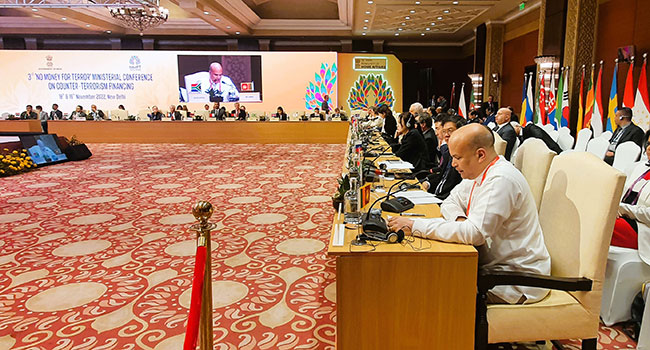 Sri Lanka has proposed to set up a group of Eminent Persons with a view to helping galvanize greater political will and to create further international awareness among states on the importance of combating terrorist financing.

Sri Lanka’s High Commissioner to India Milinda Moragoda made this proposal in his statement at the recently concluded 3rd No Money For Terror (NMFT) Ministerial Conference in New Delhi.

The High Commissioner led the delegation of Sri Lanka to the 3rd No Money For Terror Ministerial Conference on Counter-Terrorism Financing which was held from 18-19 November 2022 in New Delhi, hosted by the Government of India.

The Conference, which was inaugurated by the Prime Minister of India Shri Narendra Modi on Friday saw the participation of delegations from ninety-three countries and multilateral organizations.

Delivering the country statement of Sri Lanka, High Commissioner Moragoda further stated that political will on the part of member states is the most significant component in international cooperation to address the multi-faceted challenges faced when combating terrorist financing.

He said that though the objective of the Conference on “No Money for Terror,” which is to sensitize the international community to the dangers of ignoring this issue, is commendable, there should be a mechanism to provide continuity to the work of the Conference.

In this context, High Commissioner Moragoda proposed that India, as the Chair of the present Conference, take the lead in creating a group of Eminent Persons selected from among the member states with a view to helping galvanize greater political will and to create further international awareness among states on the importance of combating terrorist financing.

The 1st and 2nd No Money For Terror Ministerial Conferences were held in Paris in 2018 and in Melbourne in 2019 respectively. The 3rd NMFT Conference was built on the progressive agenda of an integrated approach with collective involvement initiated in the first two Conferences.