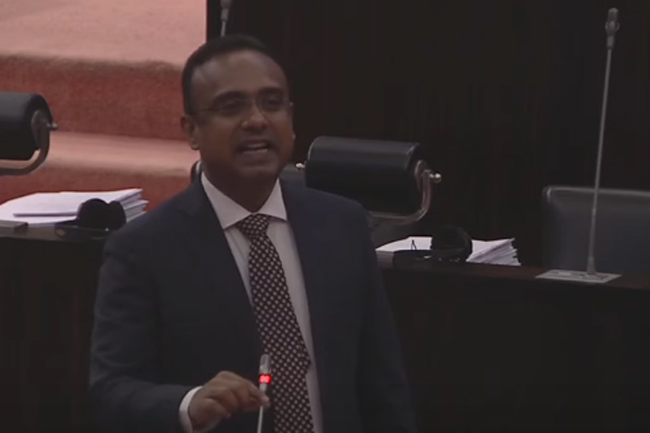 The third officer of the Sri Lankan Embassy in Oman who is accused of being involved in the human trafficking syndicate has been interdicted, Minister of Foreign Employment Manusha Nanayakkara says.

The officer in question will be placed under arrest upon arrival to Sri Lanka for further investigations, the lawmaker said further.

The Human Trafficking, Smuggling and Maritime Crime Investigation Division of the CID initiated an extensive investigation into the incident of human trafficking to Oman, under the direct supervision of the director of the said division, SSP Samarakoon Banda.

Initiating a probe in this regard, a three-member team of the CID, led by the director of Human Trafficking, Smuggling Investigation and Maritime Crime Investigation Division, flew out to Oman on October 03.

The investigation officers, after recording statements from Sri Lankan women who are sheltered at a safe house belonging to the Sri Lankan Embassy in Muscat, uncovered that they had arrived in Oman on tourist visas. They also found that these women had fled houses they were employed at for various reasons including harassment.

The investigators were told that Sri Lankan domestic workers, aged 22 - 50 years, had been auctioned off to sultans for bids ranging from Rs. 10 million to Rs. 2.5 million.

The main suspect involved in the racket and his local agent were recently arrested by the CID a few days ago. They have been placed behind bars on remand.

Meanwhile, a female representative of a foreign employment agency in Sri Lanka linked to the human trafficking ring was taken into custody after surrendering to the CID yesterday. She was later granted bail by the Colombo Chief Magistrate’s Court on two personal bails of Rs. 300,000 each.

The suspected woman, identified as Asha Dissanayake, is a resident of Dambulla. She had been in hiding for the last couple of days as investigations were initiated for her arrest.