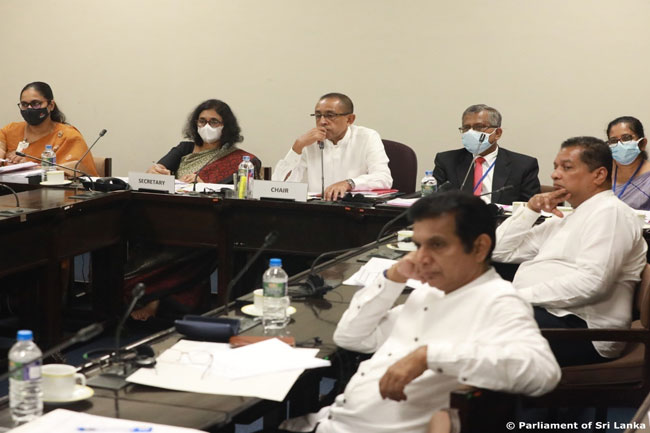 The Committee on Public Accounts (COPA) disclosed that complaints against the currently suspended officer of the Sri Lankan Embassy in Oman were made since February this year, however a decision on the matter has been delayed.

At the Committee meeting held yesterday (22), the Additional Auditor General. Mr. P. L. K Perera pointed out that on 28.02.2022, the former chairman of the Foreign Employment Bureau has requested an investigation through the Internal Audit Division regarding this particular officer.

The Additional Auditor General further pointed out that financial fraud, certificate fraud, etc. had been reported regarding this official.

Thus, it was disclosed that the former chairman of the Foreign Employment Bureau, Major General Mahinda Hathurusinghe, had requested the Ministry in February of this year to make arrangements for him to be brought back to Sri Lanka immediately, as investigations may be hindered if this person remains in the post.

The committee expressed its strong displeasure for not taking action until the incident received a lot of publicity through the media.

However, the allegations could not be confirmed. The Director General said here that after calling for a report from the Ambassador of Oman and based on the investigation report received from the Criminal Investigation Department on the 4th of November, the bureau took action to suspended the said officer.

The Committee expressed its displeasure over the lack of prompt action regarding this officer and questioned on the matter at length.

The secretary to the Ministry of Labour and Foreign Employment said that even though he came to this Ministry after the month of May this year, he will accept the responsibility. The committee pointed out that even if the secretary changes, the officials should take responsibility for this.

The absence of trained workers to meet the demand for foreign jobs in many fields including nurses was also taken into discussion at length.

COPA also pointed out that the responsibility of the Foreign Employment Bureau is not to send unskilled workers abroad, but to work with all other relevant ministries and institutions in a joint approach to send skilled workers abroad to meet the demand for foreign jobs.

Thus, the committee chairman instructed the secretary to the Ministry of Labor and Foreign Employment to prepare a mechanism within 2 months to send trained workers to meet the demand of foreign jobs in good coordination with the Ministry of Foreign Affairs, Ministry of Public Administration, Ministry of Education and other related institutions.

Furthermore, a COPA sub-committee will be appointed for this, COPA chair Kabir Hashim stated.