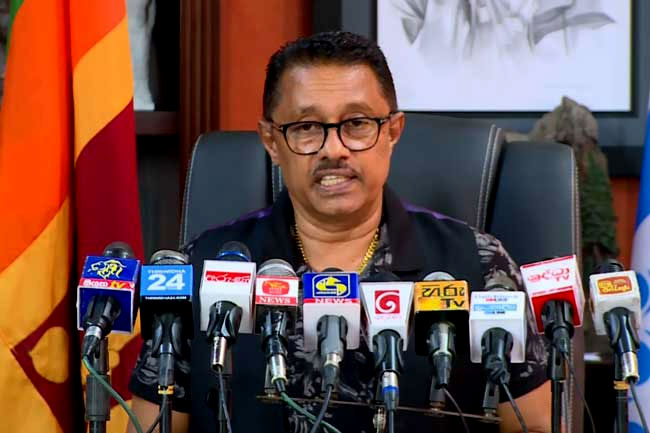 The Ceylon Electricity Board (CEB) has not requested an electricity tariff revision so far and there is no requirement for a tariff revision at the moment, says the chairman of the Public Utilities Commission of Sri Lanka (PUCSL) Janaka Ratnayake.

It was reported yesterday that athough the electricity tariff has been increased in the past, it is not sufficient to cover the loss of the CEB and thus, the request to increase the electricity bill has received cabinet approval.

This was disclosed at the Sub Committee on Identifying the Short & Medium-Term Programmes related to Economic Stabilization of the National Council held on Tuesday (29).

However, the PUCSL chief says that the CEB has not requested for electricity tariffs to be revised thus far.

Speaking at a press conference today (01), Mr Ratnayake stated that while no such request has been made yet, there is also no need for such an increase in tariffs as per the data they have received.

He further questioned why, at a time where the prices of several commodities have reduced on the global market, the same is not evident in Sri Lanka.

“If we continue like this, electricity tariffs too will have increased,  similar to the fuel price hikes, by the time we wake up in the morning”, Ratnayake said, explaining that this is why the importation of naphtha and furnace oil should be allowed similar to that of coal.

In the event the restrictions on the furnace oil and naphtha imports are eased, the current cost of Rs. 400 billion could be halved, he said, adding that as of now, higher prices are being paid for the required oil, which is then, in turn, incurred on the customers.

“CEB currently buys furnace oil and naphtha for Rs.320 and Rs. 160 per liter, respectively, from the Ceylon Petroleum Corporation (CPC)”, he said, adding that according to data received by the PUCSL, CPC too, gains a profit of roughly Rs. 120 – Rs. 140 per litre of petrol.

“CPC too has admitted to gaining a profit of Rs. 150 per litre of petrol”, the PUCSL Chairman further emphasized.