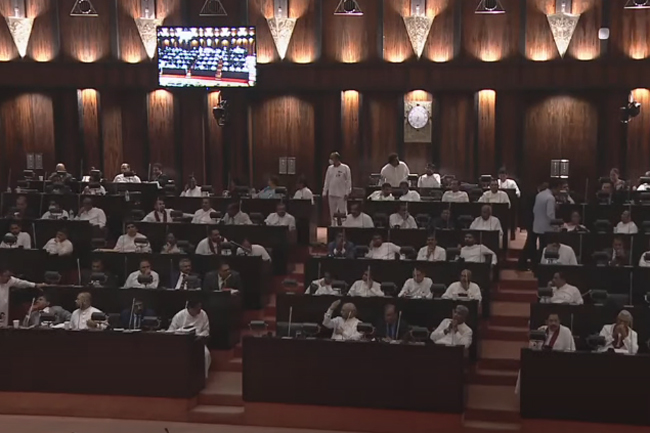 The third reading of the Appropriation Bill for the fiscal year 2023 was passed in the parliament today (Dec 08) by 43 majority votes.

Following a division on the 13-day debate regarding the third reading this evening, Speaker Mahinda Yapa Abeywardena announced the results: 123 voted in favour of the budget proposals, with only 80 against them and 02 abstentions from MPs C.V. Wigneswaran and Velu Kumar.

The debate on the committee stage or the third reading of 2023 Budget commenced on November 23 following the division on the second reading on November 22, which was passed by a majority of 37 votes.

During the vote on the second reading, 121 parliamentarians in total had voted in favour of the budget while 84 MPs from Samagi Jana Balawegaya (SJB), National People’s Power (NPP), Sri Lanka Freedom Party (SLFP), Uttara Sabhagaya led by Wimal Weerawansa and Freedom People’s Congress led by Dullas Alahapperuma voted against it. MP C.V. Wigneswaran had abstained from voting in the division on second readings as well.

President Ranil Wickremesinghe, in his capacity as the Minister of Finance, presented the 2023 Budget to parliament on November 14, aimed at creating long-term stable economic growth.

Through this budget, the government has allocated Rs. 4,609 billion for recurring expenditures such as subsidies and salary payments. For salaries and wages, Rs. 1,002 billion has been set aside, and Rs. 1,114 billion for subsidies and transfers.